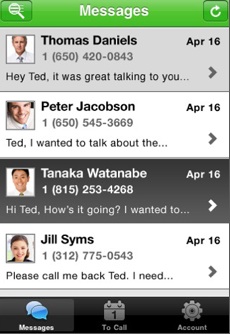 Ever since Ribbit Mobile launched, I’ve been using it to forward my calls to Skype when I am at my computer and transcribe all of my voicemails, the text of which are then sent to me via email. It’s similar to Google Voice (which Mike uses), except you can use your existing mobile number. So I was pretty excited to hear that Ribbit Mobile now has an iPhone app which was just approved today (iTunes link).

I was also pretty surprised. Because Apple wouldn’t approve the iPhone app for Google Voice, which led to an FCC investigation last summer. The main reason Apple gave was because Google Voice substituted its own dialer for the iPhone’s native dialer, and this changed one of the iPhone’s core user interfaces.

Instead, the app is more of a voicemail manager. You can see all of your transcribed voicemails, and click them to read each one, or press the play button to hear them. For each voicemail, you have the option to call back (through the iPhone dialer and AT&T), respond via SMS or email, or even record a voicemail response, which you send as an MP3 attached to an email. The app also lets you create a To-Call list to remind yourself which voicemails to respond to directly later on.

Ribbit Mobile’s iPhone app is fine as far as it goes, but I kind of just want it to take over the entire phone function of the iPhone, which is the part of my iPhone I use the least anyway. But if it did that, it probably would never have seen the light of day.