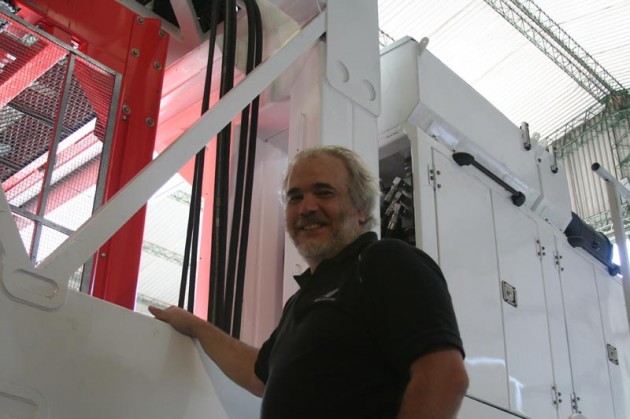 “I just emailed you a video. You have to watch it now,” I said to Paul Carr, my resident TechCrunch partner-in-crime.

“Why are you sending me a video about….farm equipment?”

“Turn up the volume. You have to hear the music.”

I probably could just embed said video and hit publish, but the Colossus—the world’s largest and possibly most badass olive harvesting machine—deserves a few more words than that. And so does the company behind it, MaqTec, which spent ten painstaking years building a business that sells $500,000 pieces of farm equipment from the middle of nowhere in Argentina.

I know, farm equipment isn’t really a regular beat at TechCrunch, but take away the product and the story of the Colossus is just like any story of a scrappy software, hardware, Web or gaming company that saw a big innovation hole in the market and decided it could go up against bigger, lazier competitors who’d dropped the ball on innovation. Only in this case, it wasn’t Microsoft or Yahoo. It was John Deere and Caterpillar.

To be fair to those lazy giants, the Colossus is attacking (and if you watch the video, you know that’s the right word) a small farming niche: High-density olive groves. But that’s exactly how most successful Silicon Valley startups skip around the plodding feet of tech giants: They find a market opportunity big enough to be a business, but small enough the big guys won’t see it or care about it. (Yet.) That was the formula for Intuit, Adobe, Siebel or more recently Flickr and YouTube.

I met Martin Bonadeo and Jose Mourelle, MaqTec’s founders, at Endeavor’s International Selection Panel in Patagonia two weeks ago and was so captivated I trucked out to Venado Tuerto Santa Fe—aka the middle of Argentina— the following week to see the machine in person. It was a long drive full of pretty much flat farmland. “If you’ve seen Iowa—you’ve seen Argentina,” Bonadeo said.

But it gave me plenty of time to hear Bonadeo’s story. This guy isn’t Indian, but trust me, he’s got enough Jugaad to fuel Argentina for the next forty years. Simply put, this is a company that never should have succeeded, but did through smarts, trial-and-error and sheer “no-we-can-build-this-company-in-rural-Argentina” force-of-will.

The idea was born back in the late 1990s. Argentina offered a tax benefit to encourage the planting of some 70,000 hectares of olive trees in poor areas of the country. Argentina had less than 20,000 hectares before the change. The catch was these groves had to be high density, a minimum of 300 trees per hectare. The incentives have worked well enough that Argentina’s Ministry of Economy and Production estimates that the country could be a top ten producer of the world’s olive oil supply within the next decade.

Olive groves take about three years to mature and Bonadeo—a self-proclaimed “soybean man” and long-time farmer—noticed a problem before a lot of other people: Who was going to harvest all these olives? Harvesting olives is expensive and time-consuming and has to be done in a 70-day window. There just wasn’t the labor in Argentina, especially given the high-density plots. It would take 800 people to harvest 1,200 hectares. “That’s more like a military operation than agriculture,” Mourelle says.

So began years of trial and error building the Colossus, a huge machine that, crassly put, 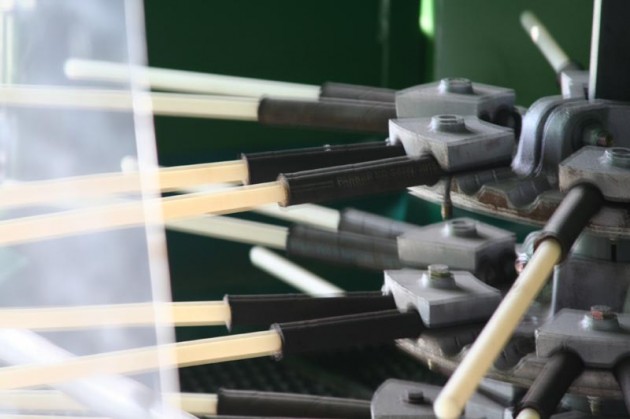 looks like it’s having its way with an olive tree. The machine straddles a row of trees and rubber tentacles gently swat off the olives at rapid speed. The arms can move in and out to hug the canopy of the tree—all controlled by a joystick in the air-conditioned, comfortable cab. The company is doing roughly $4 million a year in revenues and sells the machines in six countries. The Colossus increases productivity ten-fold and cuts harvesting costs by a third once the cost of the machine is paid back.

It was a humble beginning. Bonadeo barely had a working prototype and no customers. There’s no such thing as venture capital in Argentine farm country. Without money, he couldn’t build more machines. Bonadeo used to befriend olive farm managers to find out when the owners would be in town. He and his team would crowd into a van and tow the Colossus over for cold calls. Sometimes he was laughed at, sometimes the owner wouldn’t be there after all. “There’s no way you guys can build this business from here,” potential buyers said, even when they saw the machine working. It was disheartening.

The only reason the first Colossus was sold was luck. Two farms were close to signing, but not quite ready to commit to the pricey $500,000 sticker price. So the smaller one called up the larger one and offered to split it with him and share the machine. Simply out of Argentine machismo the owner of the larger farm decided he wasn’t going halfsies on any farm equipment, called Bonadeo into his office and said he had five minutes to make a sale.

It didn’t matter what he said, the man bought one anyway. Soon after that an Australian company placed and order for three machines. Three! “Not bad, fat boy,” Bonadeo said to himself. MaqTec was in business.

Today, it’s still an uncertain slog. Mourelle is the salesman and he spends much of that time flying around the world selling machines, while Bonadeo manages everything on the ground. He spent much of the week before his Endeavor pitch trying to get some Swedish tires out of Argentine customs.

I have to admit my original hope in driving so far to see the Colossus was that they’d let me drive one. Mourelle told me I only needed to watch a 45-minute instructional video to be qualified. (I love South America.) But alas—due to such constraints in parts and working capital—there wasn’t one with tires that wasn’t already sold and at a customer’s farm. But seeing how one was built was more impressive in person. Not because it’s elaborate but because the “factory” is so sparse. Each machine is comprised of parts from scores of local vendors and international companies and welded together in big, open garage-like workshops. Sure the rooms are big, but so is the Colossus. It’s hard to fit more than one in there at a time.

The biggest concern over MaqTec’s future isn’t so much John Deere building a me-too product. Should the Colossus become a serious enough threat to the $23 billion company, it’ll likely do what the big tech companies do: Make MaqTec an acquisition offer.

The bigger concern is whether Mourelle and Bonadeo have it in them to keep slogging away at a difficult business that’s made only more difficult by capital constraints and the challenges of building a company amid the soybean fields of Argentina. The two are definitely tired. They probably need some money and definitely need to fill out their management ranks to give each of them a break. But I’m not giving up on them. On paper, they shouldn’t have made it this far. They’ve innovated in a forgotten space with huge competitors in a place with no inherent advantages. What’s managing growth compared to that?

Watch the video below to see the Colossus in action. [NOTE: The bizarre similarity between MaqTec and TechCrunch’s logo and video intros are just sheer, weird coincidence.]