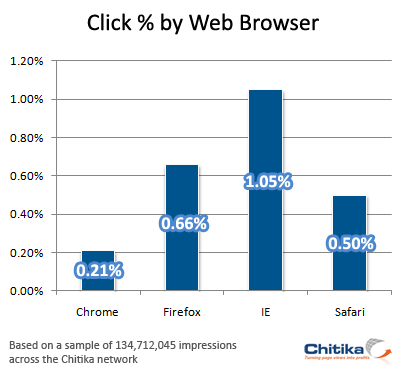 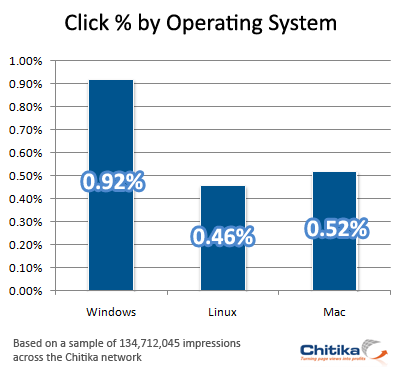 When it cut the numbers by operating system, Chitika a similar trend.  Windows users are about twice as likely as Linux or Mac users to click on ads. All of this data comes from one advertising network, so I’d say it is more suggestive than scientific (I’d love to know if other ad network are seeing the same trends). But it is a large sample.

Assuming they are representative, you can look at these results two ways. One is that Microsoft users are more valuable to advertisers since they click more. The other conclusion you could come to is that they are simply more gullible and are twice as easy to dupe into clicking on an ad than users of other products. That of course would bring you back to point No. 1, that they are more valuable to advertisers.

The thing that strikes me is that you’d expect to see similar behavior among the mainstream users of whatever brand. For browsers and operating systems that is Microsoft. The users of other brands are more likely to be switchers who are at least technically savvy enough to try something new. Those are the same types of people who are savvy enough to ignore (or actively block) ads.

But this hypothesis fails when you look at the search engine data. In that case, it is Google which is the dominant brand whose users include more of the mainstream, average consumers. Bing users are the switchers. Yet they are more click-happy than Google searchers. Why is that?