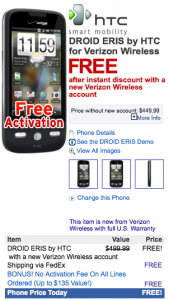 It may not have seen as much hype as it’s big brother, the Moto Droid, but the Verizon Droid Eris is still one helluva handset. Generally coming in at around $99 bucks, it’s one of the cheapest ways to get in on all this Android-hullabaloo – and for one day, it’s even cheaper. And by “cheaper”, we mean free.

Celebrating good ol’ American consumerism, Dell Mobility is taking part in Cyber Monday by dropping the price tag on the Droid Eris down to nothin’.

Of course, it’s not really free. That is, it’s not free as in beer. It’s free as in something that costs you $0 dollars up front but around $2,000 after a 2-year contract. With that said, you’ll likely have the same 2-year contract regardless – so you might as well save a Benjamin on the initial costs.

Update: Looks like the deal is over – they’ve bumped the price back up to $49.99