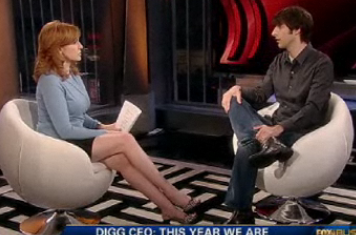 This afternoon Digg CEO Jay Adelson was interviewed on Fox Business News, where he spoke about the future of Digg and the ways it could potentially cooperate with strugging news organizations. During the interview Adelson made a few interesting comments, some of which contrast with News Corp CEO Rupert Murdoch’s assertions in an interview conducted earlier today that “people understand that it’s perfectly fair that they are going to pay for [news]”. Instead, Adelson said that he doesn’t think your average consumer is going to be coughing up money for news any time soon. Instead, he thinks that payments will come from content hubs and aggregators, including Digg itself.

One way Digg can help, Adelson said, is by helping these news sites with their advertising using techniques similar to the ones Digg has implemented. Adelson said that Digg Ads, the company’s recently launched ad product that lets users vote on the advertising they’re seeing, has been performing very well, generating high click through rates that the company “wasn’t expecting to see”. He later remarked that these ads were getting up to 100 times the click through rates that standard banner and text ads generate.

Adelson also said that the company has shifted gears a bit since the downturn hit last year — it’s now focused on growth rather than monetization. Adelson said that he’s “feeling good” that Digg is going to be profitable, and that reaching that goal is “not the problem any more”.

The interview closed out with a question about Digg’s future as an IPO candidate. Adelson says that he “has to go public at some point” both to please investors and to help out Digg’s employees, but that the time for that hasn’t come yet. However, Adelson did strongly hint that we’ll likely see Digg go international as the site looks to capitalize on the fact that 40% of its users are abroad despite the fact that Digg is only available in English.