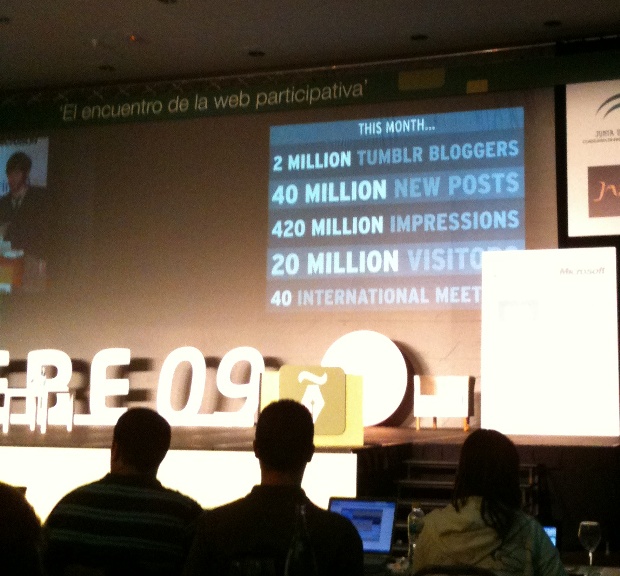 High-school dropout and Tumblr founder David Karp is doing a presentation today at the Eventoblog conference in sunny Sevilla, Spain. In one of his first slides, Karp shared some statistics about Tumblr, which appears to be growing pretty well, pretty quickly.

This means either Tumblr lost about 30 million unique monthly visitors in the past few months, or there’s some mix-up about what’s being measured exactly and shared publicly (visits vs. visitors, perhaps?). But third-party measuring services like Compete acknowledge that traffic numbers are definitely heading in the right direction.

According to Karp, Tumblr is currently seeing 2 million Tumblr bloggers publish about 40 million new posts per month. About 10,000 new people sign up for Tumblr every day on average, and the retention rate is very high: close to 85% remains active after registering for the micro-blogging service (note that Tumblr, besides drop-dead simple, is free of charge).

And as you can tell from the picture I took of one of his slides, 35% use Tumblr on Facebook, while only 15% connects the service to Twitter. The bookmarklet is relatively popular too, with about one third of Tumblr’s users installing it. About 15% downloads the company’s iPhone application (which is admittedly really good). 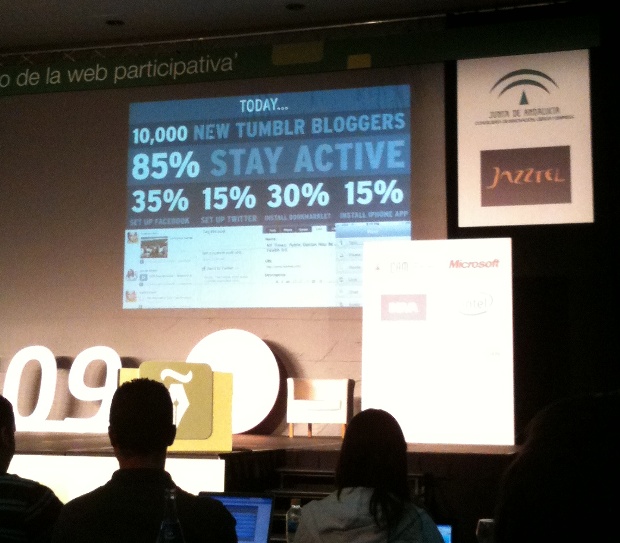 I had a brief chat with Karp last night about the company, which counts only 10 full-time employees today. Karp told me Tumblr is still not all too worried about its ability to generate revenue with the service, keeping its options open and trying to come up with innovative ways of making money rather than merely adding standard premium features or advertising.

What they are experimenting with, however, are imminent paid features that would basically give Tumblr users a way to promote their content in ‘new ways’. Sounds rather vague, so we’ll just have to wait and see what they come up with.

Also on the roadmap: localization. The Tumblr team is currently considering translating the service and offering customer support in more languages besides English.

Karp said Tumblr, which raised about $5.25 million in venture capital to date, has about two years of runway left before running out of cash.

So the main question for Tumblr is: can they continue on their growth path and find a way to turn all those eyeballs and all that activity into cold hard cash, or is it destined to fade out as more and more publishing platforms add micro-blogging features to their applications?