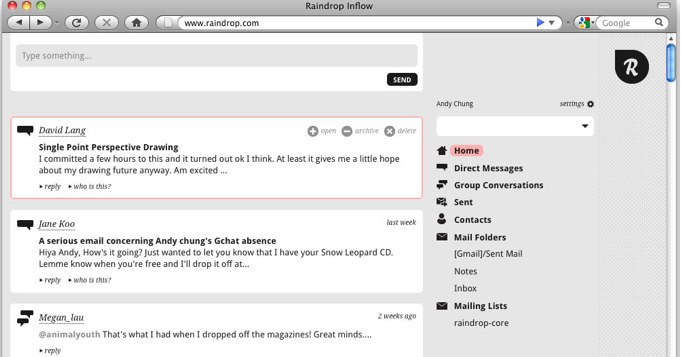 Mozilla Labs, Mozilla’s innovation group, has developed a new open-source, experimental email and communication platform called Raindrop. Mozilla says that Raindrop was built to be focused on highlighting and breaking out personal conversations, making it easier for you to see all of your conversations in one client. It is designed to “bubble up” the important conversations from your messages

According to the site, Raindrop “is an effort that starts by trying to understand today’s web of conversations, and aims to design an interface that helps people get a handle on their digital world.” Still in prototype form, the platform is very young but it aims categorize messages and then separate the personal messages from bulk messages, so you know what to respond to vs. just noting a communication. So Raindrop will import all of your email, but break out your personalized email from your mailing list emails and will portray the personal emails higher on the page. Raindrop will also separate direct messages and @replies from your stream, acting like a Twitter client And you’ll be able to Tweet from the platform and pull in RSS feeds.

I briefly spoke with one of Raindrop’s lead engineer’s and the CEO of Mozilla Messaging, David Ascher, who told me that in the future iterations the platform should include all types of messaging, including IM, Facebook, FriendFeed, YouTube and basically, any communication with an open API. And according to the site, content with in communications, such as links from YouTube or Flickr should be shown near or as part of the message, rather than in a separate tab. Ascher said that Raindrop doesn’t really aim to replace your Gmail account but add to it with an intelligent way to understand your communications. The application works on Firefox, Safari and Chrome.

Mozilla also wants to developers to build applications off of Raindrop and is releasing its API to help users customize their communications experiences. The back-end of the platform is a non-relational database (CouchDB) which was optimized for massive web interactions. The front-end, says Ascher, uses high-powered JavaScript libraries, modern CSS to give your best browser with the platform. Ascher told me that Raindrop is still very, very early stage but the platform will continue to evolve with time.

It takes page from social media messaging aggregation services like FriendFeed but with a strong focus in filtering. It will be interesting to see what two-way interactions the platform will feature and what content it eventually will bring in. Because its a modern communication system, it could compete with open communications platform Google Wave.

If you’re confused, take a look at the video. It explains the purpose of Raindrop pretty well.

Raindrop UX Design and Demo from Mozilla Messaging on Vimeo.