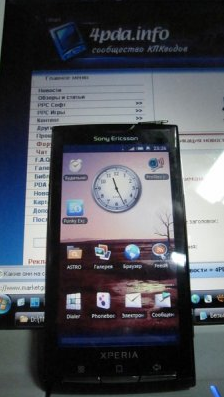 They say the best things come in small packages – and in this case, one of the things we’re looking forward to most over the next few months, Sony Ericsson’s Android-powered XPERIA X3, has come forward in a tiny, tiny picture. Yeah, don’t bother clicking that image over to the right. There is no larger version.

It’s essentially a thumbnail, but we’ll take it. We’ve seen a few photos come out of the woodworks claiming to contain the X3, but each has been blurrier, darker, and generally crappier than the last. This shot, though a bit on the small end, is the first to show the device in any sort of detail.

The specs for this thing have already trickled out long ago, so we’re all pretty confident it’ll rock an 8-megapixel camera, 1ghz Snapdragon processor, all packed behind a big ol’ 4″ capacitive touch screen. There’s also a really good chance it’ll be the first handset to tote Sony Ericsson’s super-slick Android UI, “Rachel” – but unfortunately, the spy photographer didn’t think to grab a shot of that.