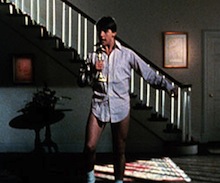 Editor’s note: This guest post was written by Paul Sloan, a journalist who’s worked for Business 2.0, Fortune, NPR, and CNN. His writing can now be found on Playing The Angles.

I didn’t really want to strip to my underwear on a street in broad daylight and sing Bob Seger’s Old Time Rock and Roll a lá Tom Cruise in Risky Business. But when I agreed to come on this trip for a very unusual entrepreneur’s adventure, I told myself that I’d play along. And this, apparently, was part of the drill.

At least, that’s the way this gang of Internet entrepreneurs like to have fun. I had agreed to attend a four-day themed conference as a way of gaining insight into the minds of an often-misunderstood group of multi-millionaire moneymakers, most of whom are Web marketers. There was the dude who sucks cash from Internet merchants by plying the affiliate trade. There was the personal trainer who teaches other muscle bums how to market themselves (annual revenue, a steroidal $3.7 million and swelling) And there was the twenty-something wunderkind from Austin, Texas, who’s minting his own fortune selling how-to info; whether its down-market like hot-dog vending or importing toothpaste from China, he’ll tell you how to make your dreams come true.

If this is starting to sound like a late-night infomercial, what can I say? Wait, there’s more!! The truth is, hanging day and night with a bunch of guys who are among the best in the world at Internet marketing can have that affect on you. Suddenly, everything looks like a sure-fire business opportunity.

So back to this 1980s-themed road rally, treasure hunt, business conference they were throwing for themselves. Of course this club has a consultant-sounding name: Maverick Business Adventures. To get in, you have to be doing $1 million-plus in revenue a year and pass a reference review to make sure you’re a good fit. Then you pony up $7,500 to become a member. It’s extra for each of these trips—$12,500 for the one I was on.

To a lot of Silicon Valley entrepreneurs, these guys are not really entrepreneurs. They get lumped in with the myriad get-rich-hucksters who prowl the Web. But I think they get this rap because they’re just super-good at what they do. They’re successful and that breeds envy—especially because they’re often one-man shops and so don’t have to share their riches with tranches of angels and other VC hangers on.

In fact, these hard-nosed businessmen feel equally judgmental of the VC-backed masses in their corporate parks and glass-walled conference rooms. Why, they argue, would anyone accept VC funding and give away a portion of his business when he can start minting cash for little investment? “Guys that take funding, buy nice cars and throw company parties,” remarked one Maverick. “We call that ‘playing business.'”

One thing is for sure: Mavericks like to party in a way I have not seen in the Valley. (Sorry Arrington. I know I dubbed you a party animal in that Business 2.0 cover story a few years back, a characterization for which I took some heat, but these guys got you beat). They also have an uncanny ability to act like complete jackasses with utter disregard to the fact that they’re acting like complete jackasses. I sort of like that. 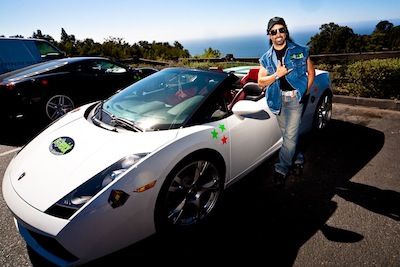 In the case of the road rally I was on, that was part of the point. Each day we paired off into teams and were given a set of missions and riddles to tackle en route to our next destination. Day 1 launched from the Ritz Carlton in Marina del Rey. We had a breakfast discussion with John Paul DeJoria, the billionaire founder of Paul Mitchell Hair Care, and then we pulled names from a pile to pick our rides for the day. The lineup included a Ferrari 430 Coupe, a Lamborghini Gallardo Convertible, an Aston Martin Vantage Convertible, and a 69 Cadillac Deville Convertible. Sweet vehicles all around.

I wasn’t a paying member, so I got whichever car had a back seat. In the Caddy I hopped.

Among the missions my team conquered was that Risky Business dance (I treated it like skinny dipping in a 50-degree body of water: close your eyes, don’t think, get it over with), convincing a couple of bikini-clad women on a beach to run slow motion, Baywatch style, and serenading a stranger with an ’80s love ballad. (Thank you teammate Chip for handling that one)

We would have won that day, but, alas, the ’69 Caddy gave up. Somewhere about an 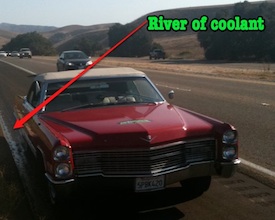 hour south of Big Sur, the exhaust we’d been inhaling all morning turned into more of a burning smell, smoke began billowing and….she was dead. (Note to organizers: Give the embedded journalist a car you think will make the drive.)

Maverick is the brainchild of Yanik Silver, a who in all the press about him is simply referred to as an Internet entrepreneur and self-made millionaire. A short and stocky 36-year-old, Silver’s demeanor is so laid back it seems hard to believe he works, which, come to think of it, probably helps his pitch when he’s selling courses on how to achieve easy Internet riches.

He began selling medical equipment for his dad’s company in Baltimore at age 14. He did that through college and beyond. To boost his sales, he taught himself to write snappy copy and began taking out direct-response ads.

In 1998  he sold a $900 course to teach cosmetic surgeons how to market themselves—before he had even written the course. Then one night in 1999—near the end of Web 1.0 bubble—Silver awoke at 3 a.m. with an idea for writing templates for sales letters and selling them on the Internet. He launched “Instant Sales Letters,” and within a few months he was pulling in $10,000 a month from this single product. People were impressed. So he cranked out a how-to product called “Instant Internet Riches.” Suddenly, at Internet speed, an industry guru was born. 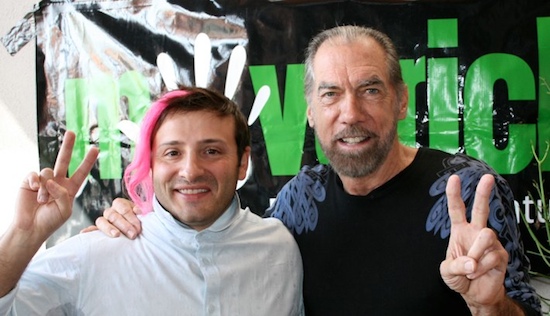 Silver started Maverick Business Adventures almost two years ago for people like himself: People who want to do crazy stuff, party, bond, swap ideas, meet big-shot entrepreneurs, help each others’ business ventures and spread the word to young people that they don’t have to grow up and work for the man. (At our stop in San Francisco, the Mavericks ran a business-idea workshop with high school kids and Silver awarded the winning team an Ed McMahon-sized check for $500 to get started; he didn’t ask for equity).

By Maverick standards, my trip was mellow. Silver has taken groups of Mavericks—they prefer the Sarah Palin pronunciation, Meeavreek—scuba diving at Iceland’s Silfra Ravine, on zero gravity flights, and off-road racing with Jesse James, the West Coast Choppers dude. In April they spent three days on Richard Branson’s Necker Island, brainstorming and partying with the ultimate entrepreneurial adventure-seeker. My group did get to ride in a Zeppelin out of Moffett Federal Airfield in Sunnyvale, CA, and there were jokes about dropping crap onto Larry and Sergey’s Boeing 767, which was parked below. 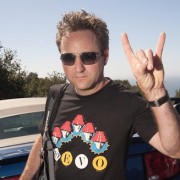 The final day’s missions included some doozies, such as inciting a group on a form of public transportation to join in a sing-along of a 1980s song (Thank you shameless tourists on the bus for attempting “Roxanne” with us, and thank you judges for not checking that it was released in 1978). And although my partner and I missed a 100-pointer when the cop I asked to outline my body with chalk on the sidewalk refused because he was dealing with an unruly troublemaker, we nailed all the big missions.

The upshot: With a total of 4,450 points, I won the whole event, beating all 17 competitors except Silver, who topped my score by 25 points but who, like the family members of radio station employees, wasn’t eligible to win.

Oh, crap, now I’m one of them, only without the bank account.