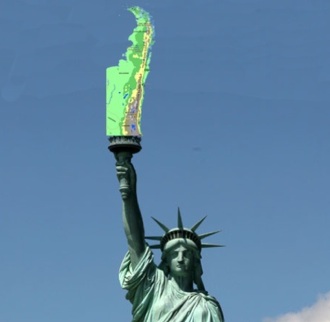 Are you an immigrant who is fed up with waiting for years for a green card which you may never get? Or a tech entrepreneur looking to dramatically cut costs? I’ve got a suggestion for you. Move South. No, I don’t mean to Los Angeles or San Diego, I’m taking about way down South in Chile. They’ll welcome you with open arms and offer you incentives which will cut your burn rate more than half. And you’ll get to live in a land which makes even California look drab.

I just returned from a fascinating trip to Chile. Their government invited me to view the progress they had made in becoming an outsourcing hub. I was impressed with their ability to grow outsourcing from nothing to close to $1 billion in revenue over a mere seven years. But I didn’t see how they could grow much more in the body-intensive outsourcing segment without choking off local industry by sucking all the capable engineers and scientists into relatively high paying IT jobs. I told them that they had as much of a chance to compete with India in outsourcing as India had in competing with them in copper exports. India has a billion people. Chile has only 16 million people, less than some Indian cities. But Chile does have 40% of the world’s copper, a magnificent inflation hedge.

Chile may not become an outsourcing powerhouse. But this South American gem could very well morph into the new land of opportunity for immigrants in general and export-centric tech entrepreneurs. The Chilean government has put together an incredible slate of incentives for technology-based companies that export their products. The government wants you to invest $500,000 over 5 years, but is pretty flexible about how you do this.

So what do you get for your $500,000? To start with, they’ll give you a visa. You can stay as long as you want – even permanently. You need to submit a business plan but you have a lot of latitude for what’s an acceptable business. Any type of high tech products, medical or biotech products, or green or cleantech products get the stamp of approval, as does software or even online gaming or social network software. Even if you want to set up a call center or technical support service that derives revenues from sales to foreign companies and they think you’re legit, you’ll get the visa.

But first, you want to check out the country, right? The government will give you 60% of your due diligence costs, or up to $30,000, to visit and explore Chile. And they’ll grant you another $30,000 to launch your company in Chile. If you work from one of their tech centers, the government will pay for 5 years of rent (up to $1 million) or split the costs if you want to locate elsewhere in this gorgeous country.

How about workforce incentives? Chile has you covered. The government will pay you (as an approved entrepreneur) up to $25,000 for the first year of “training costs” for any locals you hire. By the way, Chile has some excellent engineering schools so it’s not terribly difficult to pick up a good Java or C# programmer. They typically make $15,000-30,000 per year. Can’t find the local talent you want? Chile will subsidize your efforts to bring folks from Sunnyvale, Mumbai or wherever you may find them. And you can train these folks on Chile’s dime as well. And if you decide to buy some land and build your own labs or offices, they’ll give you 40% of your costs up to $2 million. How about for H-1B immigrants or other talented folks who want to move to Chile? Simple. Get a legitimate tech job and they’ll give you a visa, no questions asked. Are you starting to get my drift? (Note: If Chile took even one-quarter of all the H-1B holders current working in tech jobs in America, they would probably come close to doubling the size of their technology workforce).

But wait, there must be a catch. Not that I can find. I visited Vina Del Mar, a beautiful beach resort about an hour from Santiago. The weather and landscape is just like California (except they’ve got their seasons reversed – when its summer in the U.S., it’s winter down under). Vina del Mar is located right next to Chile’s wine country, boasts magnificent beaches and looks like a modern version of Miami. Guess what a fully furnished 2 bedroom apartment on the beach costs? $500 per month. Even the capital city of Santiago looks and feels like a new European city, with very low crime rates, great weather and friendly natives. For those true California boys, Chile even has great surfing.

To top this off, Chile is a thriving democracy with one of the most open economies in South America. In fact, if I was starting a new tech company and didn’t need to be in any particular area, I’d start it in Chile in a heartbeat. What really struck me was how many Chileans I met who boasted of their country being a “land of immigrants.” Everyone told stories about how Chile was built by immigrants and welcomed the world’s most skilled and most oppressed. This reminded me of how America used to be before the xenophobes started blaming immigrants for all their own shortcomings and misery. Seems too good to be true, doesn’t it? There are some downsides. Chile is a 15 hour flight from the West Coast. And if you’re going to stay long-term, you’ll need to learn Spanish. That’s not a big price to pay for all the benefits.

Yearning to be free of the costs and constraints of the tech landscape in North America? Go South, young techie.