We haven’t written about StickK, the company that allows you to put a contract on yourself in order to help you commit to improving your lifestyle, since the service was launched back in February 2008. Good thing the company got in touch with us and pointed out they’re doing quite nicely, which gives us a good excuse for an update on them.

StickK was founded by three Yale economists (two professors and a graduate student) and basically allows you to accomplish a goal by setting up a contract against yourself, whether it’s about losing weight, stop biting your nails, writing a novel or whatever else you feel you need to achieve in life. The site takes credit card information up front and charges it on a weekly basis should you fail to meet your self-submitted goal(s). You can designate someone to be your referee — a friend, co-worker or spouse, for example — but in the end, if they fail to do their jobs, StickK.com will take your word for it. The concept is similar to what HealthyWage recently presented on stage at the TechCrunch50 conference.

StickK has been busy raising more funding for the development of the web service. After the founders put in $150,000 of their own cash to get started, the New York-based company went on to raise two rounds totaling an amount north of $2 million from a pool of investors. That brings the total investment in the company to about $2.2 million to date.

User numbers are trending upwards too, fortunately for the upstart (I’m sure it was one of their own goals). When the company launched in February 2008, it grew to 4,000 users by the end of the month and now counts 42,000 registered members. Users so far have entered into 28,000 contracts, and put almost $3 million on the line for their commitments. StickK claims the system is working, too: users are said to be 80% successful when financial stakes, a Referee, and Anti-Charity are utilized.

StickK is now thinking of ways to monetize the service with a B2B offering. The freshly launched stickK.com Corporate Portal offers companies, schools, gyms, health insurance agencies etc. a chance to set up a co-branded version of stickK where customized goals can be designed to achieve wellness and corporate performance-related initiatives. The idea is that corporations could use the platform to drive down healthcare costs while at the same time increasing worker productivity.

As I said, the concept reminds me a lot of HealthyWage, which was one of the startups I was most impressed with at TechCrunch50. I really think it’s a model that works – I like the idea of financial incentives for achievements that have a positive effect on people’s lifestyle and ultimately, society – and I’m very curious to see how much growth these and other companies in this space have in them. 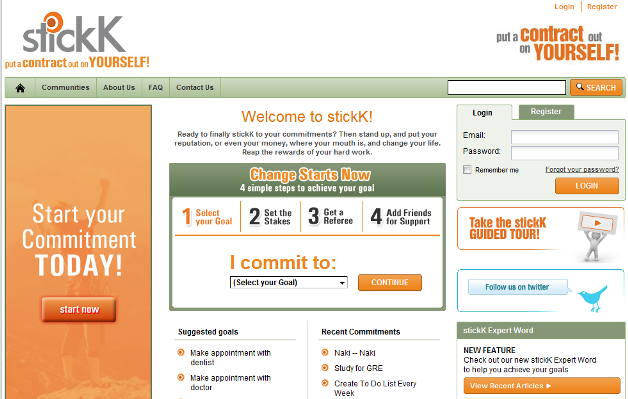