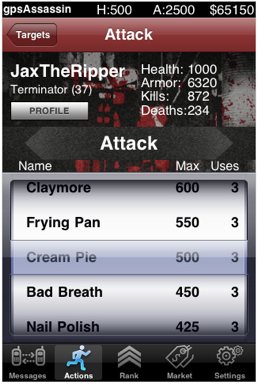 The iPhone has all the ingredients necessary to build the first popular location-based game that combines the real world with fantasy — a scenario long dreamt of by gamers. A handful of games like Parallel Kingdom have gotten some traction, but they have yet to really catch on on a large scale. And while Foursquare has gotten quite a bit of attention, particularly in tech circles, its gameplay elements are very rudimentary. Now a new game called gpsAssassin may have struck gold by fusing location and the popular campus game Assassins with the text-based games that have become immensely popular on social networks, Twitter, and the iPhone.

Founder Nicholas Holland says that he’s had some difficulty describing the game, largely because it looks very much iMob, Mafia Wars, and similar games that don’t rely on your location when you play them. And while gpsAssassin may share some of the same mechanics with these — it’s primarily text based with leveling, attack/armor ratings, and other key RPG elements — its location features turn it into a different beast entirely.

After picking a nickname, the game presents you list of possible actions, the most important of which is “Scan for targets”. This will bring up a list of any players within a five mile radius (anyone within a two mile radius is shown under a list of ‘short range’ targets). After tapping on someone’s nickname, you enter Attack mode, where you choose from a list of actions.

This is where the game’s real fun kicks in: you can choose from a list of available attacks created by other users, which range from silly (‘Throw Nail Polish” or “Robotic Kitty”) to more conventional forms of violence. Better yet, you can get creative and think up your own attack, which is especially fun when you personally know the person you’re attacking. Your target will then be informed that you’ve attacked them with whatever weapon you choose, and depending on your strength they’ll find out who emerged as the victor.

This is all, of course, dependent on where you are physically located. If your favorite victim picks up shop and drives across town then you won’t be able to attack them with your ‘Gospel of Chuck Norris’ or ‘Mullet of Fury’. Holland says that gamers have been known to actually change their driving routes so that they can get in their attack on an unsuspecting victim and get out of dodge before they have a chance at retaliation. He also says that he’s seen neighboring offices band together to wage war against a cross-town competitor. Clearly, there’s plenty of room for friendly (or not so friendly) rivalries to emerge.

While most people will probably spend most of their time thinking of especially infuriating (and hilarious) attacks, gamers can further boost their stats by fighting against non-player characters. And the game offers virtual goods that you can use to boost your stats and win/loss percentage without the time investment, which is where the game will make most of its money.

The application has been available in beta since February but Holland staggered its release by initially pricing it at $5.00, then $.99. Now that it’s ready for mass consumption, gpsAssassin is available for free, though there are a handful of premium versions that come with more of the game’s virtual currency.