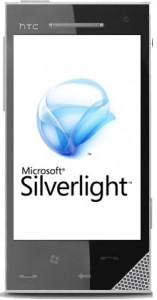 WinMo 6.5 might still be a month out, but that hasn’t stopped the mobile folks in Redmond from spilling the beans on an upcoming (albeit foreseeable) addition to WinMo 7 – MS’s own Flash competitor, Silverlight 3.

The good word comes from Brian Goldfarb, a marketing director for Microsoft’s Silverlight team, who told the Seattle PI that WinMo 7 will indeed come integrated with Silverlight 3.

“We are 100 percent dedicated to seeing Silverlight across all three screens – PC, TV and mobile,” he said.

Theoretically, the inclusion of SL3 means future WinMo 7 devices could support Netflix’s “Watch Instantly” feature, bringing tons of your favorite content right to the comfort of your 3″ display-equipped mobile phone.

This is also a direct jab at Adobe, who has been notoriously slow (er, uninterested) in porting Flash to the mobilesphere in any meaningful way (read: No Flash for iPhone). Sure, they ported Flash to Android (but it doesn’t really work all that well, as seen on the Hero), and there is Flash Lite, but unfortunately, until Flash and Flash Lite files become interoperable, it seems as though MS actually has a leg up with Silverlight 3.