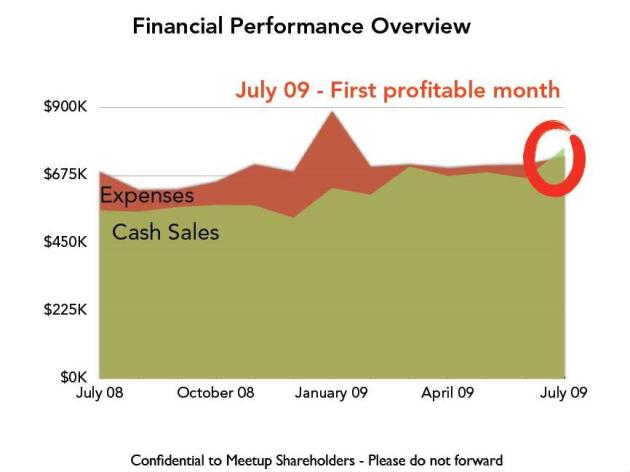 Meetup, a web service that enables people to organize and manage real life get-togethers, has proven to be a popular tool that people are willing to pay for. TechCrunch has obtained a slide deck that the company used for an August 2009 shareholder update, revealing its current financial situation and past revenue forecasts. The document shows the New York-based company is performing well, having reported its first (mildly) profitable month last July.

Financial results actually fell short of forecasts put forward last year, when Meetup aimed for 50% growth in both meetups and revenues by this Summer. Despite the fact that growth was actually more like 35-40% over 2008 in its main metrics, Meetup (unexpectedly) hit profitability last July on net income of $30,000.

Interestingly, the company informed its investors that it wasn’t actually aiming for profitability this soon, referring to it as a ‘byproduct of hard work’, and remains cautious about predicting future profitable months. In fact, they’re clearly stating that an increase in ‘Successful Meetup Groups’ (SMUGs) has priority over revenues and profits at this point. The company’s biggest challenge right now? Hiring staff fast enough to keep up with growth.

Let’s dive into the numbers.

Year over year, Meetup’s cash sales went up 37.2%, from $558,576 in July 2008 to $776,495 in July this year. At an annual run rate, that means Meetup is currently clearing about $9.2 million in revenues. The number of meetup groups increased from about 19,700 groups to 27,500 in the past year, which is relevant because organizer fees make up the bulk of the company’s income. Approximately 85% of Meetup’s income comes from meetup organizers who pay for the service; the rest comes from sponsorships and on-site text advertising.

Meetup still has $8 million left in the bank, having raised $20.1 million in venture capital since its 2002 Series A round.

Meetup CEO Scott Heiferman had earlier confirmed some of the numbers on Twitter. 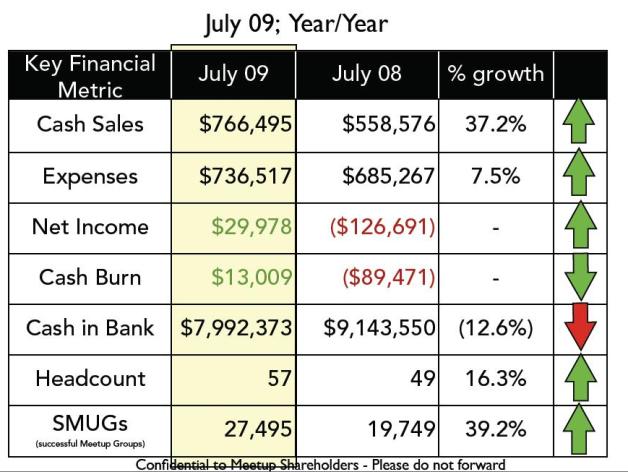 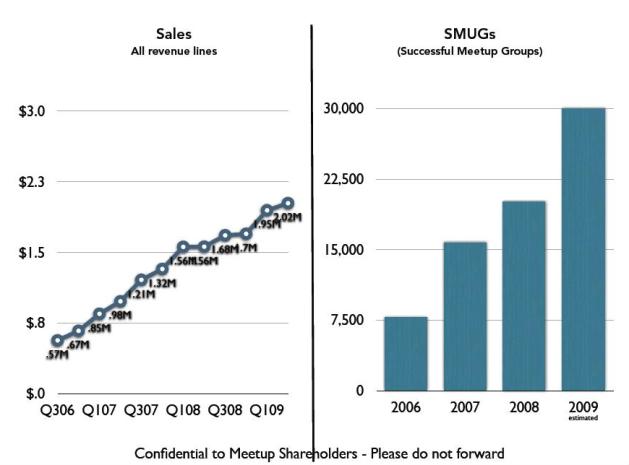