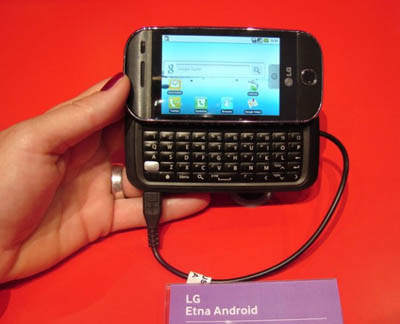 Earlier this year, LG began offering a strange little QWERTY slider called the “Etna”. We didn’t hear much about the handset before or after launch (primarily because it was only available in the UK), but we don’t often forget a name. As such, we were quite surprised to find out that there is another device going by the Etna name – but this ones got a little surprise packed inside.

Germany’s Chip Inside spotted it at the IFA trade show. There it was, tucked away within the Vodafone booth: The LG Etna. Oh, wait, I’m sorry: The LG Etna Android.

Maybe we’re letting the Android fanboyism get to our heads, but we’re aching to touch this one. Unless our eyes are fooling us, that keyboard looks downright fun to use. We don’t know all that much beyond what the above photo provides, save that it has a 3″ screen, a 5MP camera, and Bluetooth – but we’re still excited.