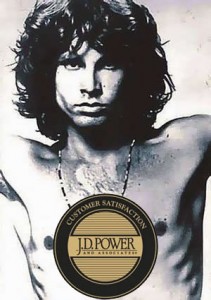 “The West is the best,” exclaimed The Doors front man, Jim Morrison, many moons ago. Now, according to J.D. Power and Associates (can’t forget the associates!), “the best in the West,” regarding wireless call quality, include Verizon, T-Mobile, and Alltel.

Ok, so Jim Morrison and cell phones have about as much to do with one another as peanut butter and Jupiter. But, although our friends out East may not agree with Morrison’s sentiments (or relevancy), we can all agree that call quality matters.

It reports call-quality issues per 100 calls; the lower the score, the better the performance. In the 16-state West region, J.D. Power says Alltel, T-Mobile and Verizon Wireless are tied with scores of 10.

Not surprisingly, AT&T and Sprint Nextel both received the same lower score, lucky 13. I can’t speak for AT&T folks (although there is plenty of complaining regarding service in the Bay Area), but personally, I’ve had very few issues with Sprint in and around San Francisco.

The best news, perhaps, is that overall “wireless carriers have improved their performance in a number of areas recently, including dropped calls, failed initial connections and static.” Now if we could work on opening up those exclusivity deals as well as the networks, and do away with long-term agreements, the mobilesphere would really be headed in the right direction.