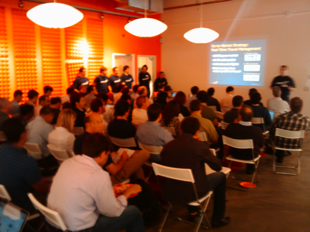 I’m here at Y Combinator’s Demo Day, where the latest batch of the incubator program’s startups are showing off the fruits of their labor to a room of press and VCs from around Silicon Valley. The turnout today is huge —  VCs representing billions of dollars in managed funds are here, with investors from US Venture Partners, XG Ventures, Founder’s Fund, Greylock Ventures, First Round Capital, Bessemer Venture Partners, True Ventures, Freestyle Capital, Venrock, O’Reilly AlphaTech Ventures, FBfund, renowned angel investor Ron Conway and more in attendance. There are also plenty of executives from established companies, including Google exec Bradley Horowitz and Don Dodge from Microsoft. Past Demo Days have certainly received their fair share of attention, but it seems like YC’s larger class size, and perhaps the companies themselves, are bigger draws than ever.

FlightCaster
FlightCaster, which launched yesterday, is a new startup that lets you check if your flight is delayed hours before the airline will tell you. The company says that 25% of all flights are delayed, and oftentimes passengers aren’t notified about the delays until the very last minute. The startup says that more established travel sites don’t offer this information because they often have relationships with the airlines, and they aren’t willing to disrupt those partnerships. In the future, the company plans to offer a list of alternative flights so you can quickly rebook once you learn of a delay.

RethinkDB
RethinkDB is a new kind of database that’s built from the ground up for solid state storage (the same kind you’ll find in an iPhone or thumbdrive). The company launched last month, and says that all existing databases were designed for traditional, platter based hard drives and the constraints associated with them. The startup says that solid state drives change these assumptions (they’re already ten times faster than MySQL), and that the space is about to explode, explaining “we’ll have lots of competitors so we have to move fast”.

DailyBooth
DailyBooth, which we covered yesterday, is a “Twitter for pictures”. The site invites users to upload photos to the site on a regular basis, at which point the community is free to leave comments both in the form of text and their own photos. The company will soon be rolling out ‘push’ functionality, so users will be able to send out their photos to sites like Facebook, MySpace, and other social sites.

JobPic
JobPic is a new marketplace that allows users to sell their services, allowing users to “shop for services the way you shop for goods”. JobPic brings the shopping cart model we’re familiar with at sites like Amazon to service providers — people who might offer things like one-on-one lessons, or haircuts. In other online service markets, buyers submit a service request to providers (Guru, Elance). This works well for some things, but not others. JobPic wants to be an ‘eBay for services’, where the seller specifies what they have to offer.

Mixpanel
Mixpanel, which launched last month is a realtime analytics platform that allows developers to track more advanced metrics than what they could typically track using services like Google Analytics. The platform allows developers to track pain points in their apps, which allows them to further streamline things like signups and payments. The company will process 100 million events this month and will be profitable this month.

JobSpice
JobSpice, which launched last Monday, is an online resume editor. The site allows users to quickly generate highly stylized, web-friendly resumes with a minimum amount of effort, and also lets users swap between styles with one click (jumping between templates using programs like Word can be much more frustrating).

HighlightCam
HighlightCam, which we covered last month, is a service that can look through hours of video footage and identify when something happens. The company’s first product involves security cameras — it can take many hours of security footage and then identify the few moments when things out of the ordinary are happening, cutting down the footage to only a few minutes of important content. Soon the company will be releasing its API, which will allow developers to tap into the software to shorten a variety of different kinds of content (including things like wedding videos). The software can produce 20-30 second trailers automatically for any kind of video.

Olark
Olark is a new site that launched moments ago and allows you to easily integrate a chat widget on your website. When a visitor is browsing your site, you can track their browsing in IM clients like iChat, and any time they attempt to contact an operator through the chat widget, you can have the conversation automatically relayed to your chat client.

Bump Technologies
Bump is smartphone application that allows users to quickly exchange contact information simply by tapping their phones together. It has already been featured by Apple in an iPhone commercial and is seeing strong growth (you can see our post here). But contact information exchange is only the beginning for the startup: The company is working to become cross platform with support for a variety of smartphones, and will also open an API/Platform “Powered by Bump” that allows developers to transfer other types of data.

RentHop
RentHop is a housing marketplace, without the broker fee. The company says that Craigslist is bad for renters, because it’s often overloaded with fake listings. RentHop is currently focused on the NYC market, offering rich search and structure to ensure quality. Both founders are engineers, but they’ve put the time in to get real estate licenses too.

FanChatter
FanChatter, which launched earlier this month, is a platform for sports teams, television networks, colleges, and corporate sponsors that allows them to deploy social-media powered products to new mediums, like the billboard of a baseball stadium. One of the site’s products includes a photo sharing feature that lets fans at a stadium submit their pictures from a ball game to a designated Email address for the chance to have it shown on the stadium’s Jumbotron later in the game. Other products include a social media chatterbox which pulls in content from sites like Twitter. NBC Universal is using the FanChatter ChatterBox for homepage for a show called GhostHunters.

Listia
Listia is an “eBay for free stuff“. While you’ve always been able to give away free items on Craigslist, that comes with many problems like mountains of Email. To work around these issues, Listia uses an eBay auction-like system, in which you use on-site ‘credits’ to bid on getting these free items. You can earn credits either by selling your own items or by buying them. Because these credits have some value, you can unload things on Listia without having to worry as much about an endless number of queries from people who aren’t genuinely interested in what you’re giving away.

DirectedEdge
DirectedEdge says that the web is soon going to see an Amazonification — you’ll see Amazon-like recommendations in a variety of other spaces. DirectedEdge is looking to lead this trend by providing a recommendation engine for any site. Since launching two weeks ago, the site has gotten dozens of customers.