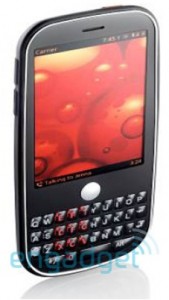 Shortly after we broke the news that Palm was had at work on device to follow the Pre, the details came pouring in: first we got the codename (Pixie), then we got the tentative marketing name (Eos). A few days later, we had a launch window: according to a leaked AT&T slide, the Eos would launch in the second half of 2009.

Alas, things get a bit crazy when you’ve just launched a device that people care about for the first time in half a decade. With their hands heavy under the weight of a work-in-progress app store and a nascent platform, Palm might be delaying the second coming of their second coming.

While their source goes completely unmentioned (thus putting the entire claim in question), Amir Rozwadowski of Barclay Capital is claiming that the Eos has slipped back into 2010. That’s not exactly the best news for Palm, who could have benefited greatly by having a economically friendly device (the Eos will purportedly cost as little as 50% of what the Pre costs, bringing it in somewhere between $50-$110) on AT&T’s shelves through the Christmas rush.

For Palm’s sake, we hope this one’s just hearsay.