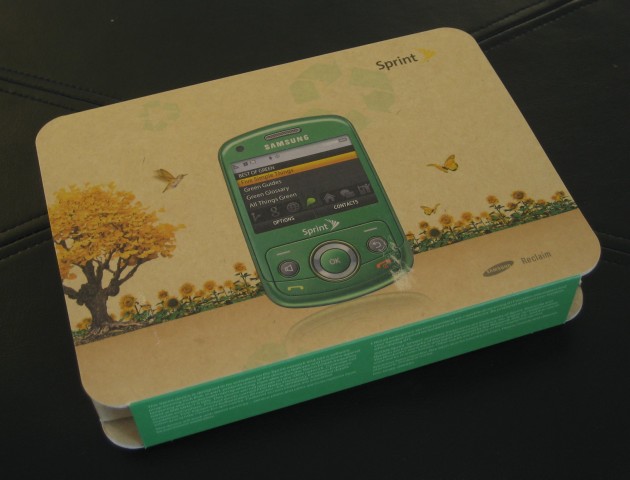 Late last week, Sprint, Samsung, and Captain Planet announced a plan to save the world, very slowly: the Samsung Reclaim. Made primarily of corn and renewable resources, the Reclaim is a green phone – both figuratively and literally. Peter Ha, who is known (outside of his CrunchGear writings) primarily for planting trees and installing solar farms in Africa, was having none of it.

Mr. DeliveryMan just showed up with our Reclaim review unit. We’re just tearing it apart now, but we figured we’d get some pics up for those at home interested in this thing. As a side note, it should be mentioned that this phone, made at least partially of corn, does not taste like corn. Yes, Yes; I licked the phone. Purely in the interest of science, of curse. It tastes like a phone — or more accurately, like a combination of bear mace and lysol. If I drop dead mysteriously in the next 48 hours, blame Samsung.

Whether or not the whole “Green” thing is much more than a gimmick, I remain undecided – but for $50 bucks on a 2 year-contract, this feature phone really isn’t too shabby. We’ll have our hands on impressions up in a few hours.