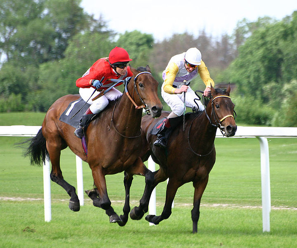 Last month news broke that a team of computer scientists had finally managed to improve Netflix’s recommendation algorithm by 10%, making them eligible to win the $1 million Netflix Prize, a competition that began back in 2006. The team, BellKor’s Pragmatic Chaos, is composed of two former leaders in the competition who banded together in attempt to finally break the 10% barrier and managed to succeed with a score of 10.08%. However, their announcement kicked off a 30 day window where other teams were invited to make their final submissions and potentially take the prize. Tonight, with just one day remaining, a team called The Ensemble has managed to overtake BellKor with a score of 10.09% — an improvement of .01% over the former leaders. You can see the full leaderboard here.

According to its homepage, the Ensemble is made up of two teams who chose to join forces: “Grand Prize Team” and “Opera Solutions and Vandelay United”. The Ensemble has just posted the following blog post to its official site:

We are happy today to have made a submission which surpasses Netflix’s 10% Grand Prize target. The Ensemble is the second team to do this in less than a month. We are very proud of our achievements, and those of our top competitor, Bellkor’s Pragmatic Chaos.

The competition will end tomorrow morning, so teams still have a little bit of time left to make their last-second submissions, but things are looking good for The Ensemble. This has to be absolutely brutal for team BellKor.

Update: With only minutes remaining in the last call period, BellKor’s Pragmatic Chaos submitted an entry that tied The Ensemble, with a score of 10.09%. Twenty minutes later, and only four minutes before the competition ended, The Ensemble struck back with a buzzer-beating 10.10% submission.

Thanks to TechCrunch intern Dan Romero for the tip.