Seesmic, the Twitter and Facebook desktop client developed by Loic Le Meur, is launching its much talked about browser-based Twitter client today at TechCrunch’s Real-Time Stream CrunchUp. We first heard about the plans for the browser client at the TechFellow awards in June, but its been in stealth mode for the past few months. You can try Seesmic Web in preview here.

We got a chance to test it out and it’s pretty cool. It reminds me of a Gmail interface for Twitter. Currently, the browser client only includes support for Twitter but Le Meur says that Facebook integration will be coming soon. The client is pretty basic, simple to use and similar in some ways to the desktop client.

You can open up your timeline in a column, your mentions in another column and your direct messages in another column. You can also use the mouse to roll over a Twitter handle and will be given the option to see the user’s profile, message the user or unfollow the user. My favorite part of this interface is using the timeline in the single column mode, which makes it seem like a simple, easy to use email application. The other compelling part of the browser client is the layout of the direct messages, which makes it simple to have and see a conversation with someone. 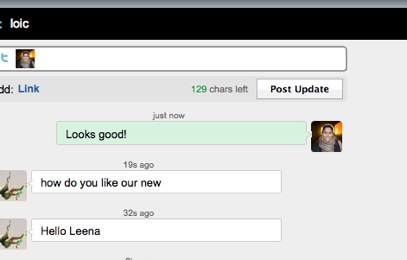 As we reported in June, Seesmic is also launching the fourth version of its desktop client today, which will include the ability to view Seesmic in single column mode or multi-column mode, with ability to change detach and change the size of columns. You will also be able to save space on the client by collapsing and expanding the sidebar with the click of a button and will still be shown minimized buttons with shortcuts to toggle between accounts, userlists and searches. Seesmic has also updated its internal code to improve performance and now allows you to modify the timeline limits in set in Seesmic Desktop to help control performance. These limits define the maximum number of messages kept in each of your timelines from your friends; replies, private and sent; and searches.

One of the differentiating factors between Seesmic and main rivals Tweetdeck and Tweetie is that Seemsic pulls in status updates from Facebook and allows users to update their Facebook status from the desktop client itself. Le Meur tells is that Facebook status updates are becoming as common as Twitter updates from Seesmic, especially since the client enables two-way communication.

What’s missing from today’s rollout is the Seesmic iPhone app, which Le Meur says is still in the works and will be released in the near future.

Seesmic Desktop, which faces competition from popular client and rival Tweetdeck and a plethora of others, officially launched in April. Le Meur tells us that Seesmic is getting about 10,000 downloads a day. PeopleBrowsr, another social network aggregator (and presenter at the Real-Time CrunchUp), recently made the opposite switch, adding a desktop Adobe Air client to its browser product.

As TechCrunch’s Robin Wauters recently wrote, the social network aggregator market is almost fully saturated and new players are throwing their hats in the ring every day. So it makes sense that Seesmic would want to not only build up its offering with useful features, but also try to conquer all the mediums—web, desktop and mobile. Check desktop and web, now onto mobile!

Disclosure: TechCrunch editor Michael Arrington is an investor in Seesmic. I am not.

Here’s the video of Le Meur’s demo of the new version of Seesmic Desktop and the browser-based client: