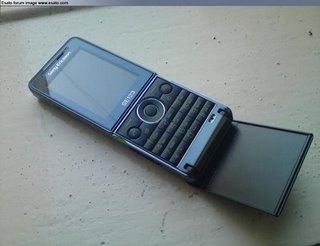 Do you miss the good ol’ days of mobile phones? There was none of this touchscreen nonsense going on, and getting applications onto your phone was like solving Section 4 of Kryptos. Better yet, the number pads on many candy bar phones came shrouded by a plastic cover, allowing you all the benefits of a flip phone without actually having to own a flip phone. Because there are a ton of benefits for owning a flip phone, you know. You get discounts.

Don’t worry – you’re not alone. Sony Ericsson and roughly 16 other people around the world miss this design too, so they’ve gone ahead and brought it back. The handset, codenamed “Twiggy”, originally debuted in some old press materials surrounding a Sony Ericsson Bluetooth device. Realizing they hadn’t actually announced this thing yet, the details were pulled and all was mum. Now a handful of real world pictures have made their way out, indicating that it’s either going to be announced soon or it has been canned, and thus no one at Sony Ericsson cares to keep it a semi-secret any longer.