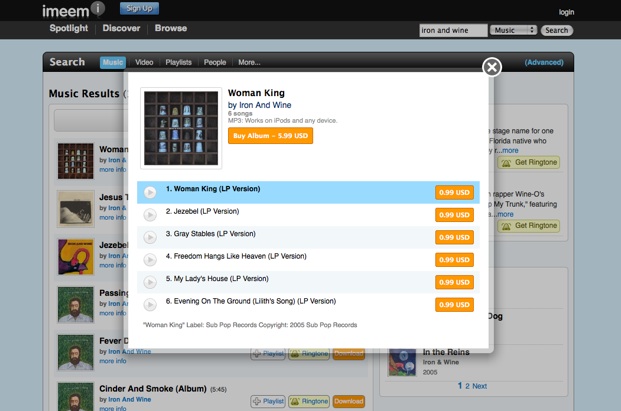 Does embattled music streaming site imeem think it can take on iTunes? For the most part, nearly every streaming song on the site has a download button which links to both iTunes and the Amazon MP3 store. But it is quietly testing its own music download store which bypasses iTunes and Amazon and sells MP3s directly. For instance, this is the case with some Sub Pop artists, such as Iron and Wine and The Shins. When you hit the download button on songs for those artists, a window pops up showing the album where that song came from with with the option to download the entire album or any individual song for $0.99 (see screenshot above). You can then pay imeem directly by credit card or Paypal and download the song to your computer.

This imeem music store is obviously an experiment. The vast majority of songs still direct users to iTunes or Amazon for downloads, and you’d expect imeem to provide its own lightweight desktop client to manage and store the downloads, or at least place them directly into iTunes instead of a download folder on your computer. But it is also likely a sign of things to come. After nearly running out of cash because it was paying out too much money to the music labels for streaming rights, imeem went through a sever recapitalization. Warner Music ended up taking a $20 million hit to write down its investment and bad debt from imeem. Instead of walking away, however, Warner renegotiated its deal with imeem to get new shares without putting in any new money.

Imeem is doing everything it can right now to cut costs and find new sources of revenue. Last week, it announced it will soon stop storing user’s photos and videos, an expensive remnant from its earlier strategy to compete with Facebook and MySpace as a larger social network. Now, imeem is focusing on being a music site. It was one of the first sites to strike streaming deals with all the major labels and for the most part has renegotiated those on more favorable terms. Its iPhone and Android apps, which also offer streaming music, are taking off and driving even more downloads.

And that’s where the imeem music store comes in. Currently, imeem gets a dinky 5 percent affiliate fee for every song its users buy from iTunes or Amazon. As part of its renegotiations with the music labels, it is getting download rights along with its streaming rights I’ve been able to confirm. Instead of getting a few pennies for each song from iTunes and Amazon, imeem can capture the roughly $0.30 per song that doesn’t go to the labels. What is more likely, however, is that it is giving the labels more than the 70 percent cut they get from Apple. Even if it splits its share with the labels and takes only $0.15 per song, imeem still stands to triple its download revenue. Add in ringtone sales and its existing advertising revenues (imeem attracted 25 million unique visitors worldwide in May, according to comScore), and imeem might just have a chance to survive. But if it does survive, it probably won’t be because of its advertising model alone. It will be because the free music is driving enough sales of actual music downloads.

Update: Imeem has confirmed that it is planning to roll out this store more broadly, but says that when it does it will continue to offer iTunes and Amazon downloads as an option.

Below are screenshots of the new post-payment window for songs imeem sells itself and the regular affiliate link window which still pops up for most downlods: 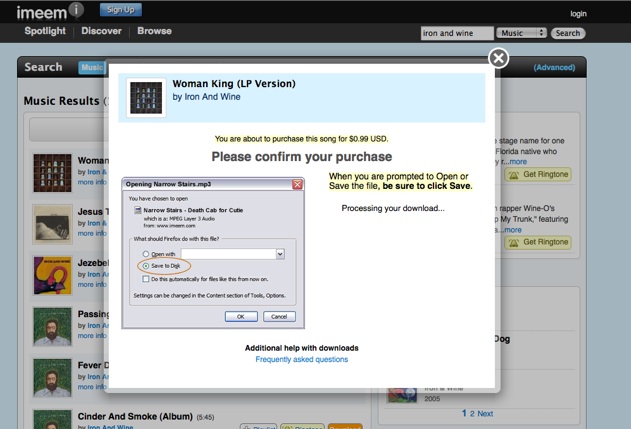 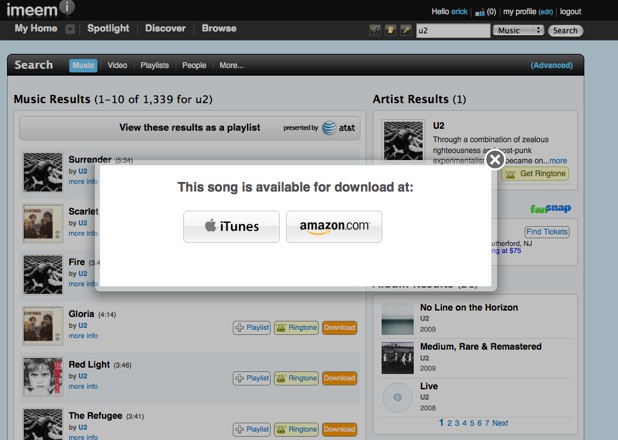