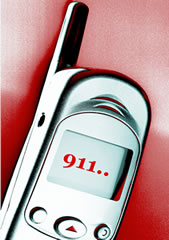 This post is a bit different from the technology news that we generally cover here at TechCrunch. But it’s something that I think needs to be said.

Last night I got word that my parents had witnessed a tragic accident while driving in Northern California. I won’t get into the details, but suffice to say one person was killed and others were left bleeding, in various states of unconsciousness. Thank God my parents were not hurt in the accident, but they witnessed it first hand, as well as the disturbing aftermath.

Immediately after the accident, my parents and other witnesses began trying to dial 9-1-1. Attempt after attempt resulted in a busy signal. This isn’t unusual in the event of an emergency, as multiple dialers often tie up the lines to report the same incident. Except it seems that nobody managed to get through for far too long: emergency personal didn’t arrive for 20 minutes. The first officer to arrive at the scene said it took him two minutes to get there from the time he got the call. Which means that it took approximately 18 minutes for the news to reach him in the first place.

During a conversation with my father following the accident, he said one of the most profound things I’ve heard since I arrived in Silicon Valley: “Why is it that I can pull out my cell phone and call France or browse the Internet whenever I want, but I got a busy signal for 9-1-1 for 20 minutes?” I wish I had an answer for him.

In the United States, we’re taught from a very young age to call 9-1-1 whenever there’s an emergency. Something bad happens, you call that number, and someone on the other line will be there to help you. Getting a busy signal after dialing 9-1-1 is the closest thing you can have to a mental null set. It doesn’t compute.

But it’s apparently happening more often than most people would believe. A recent report in the Sacramento Bee says that more than 26% of all wireless calls to 911 in California are “abandoned” — in other words, more than a quarter of the people calling 911 hang up in frustration before they even get to talk to someone. In a world where we can interact with people across the world at a moment’s notice, I just don’t understand how one of the things we’ve always taken for granted can fail so miserably.

Now, I’ll be totally upfront and admit that I know relatively little about the way 911 dispatchers work. I am sure that the incident can be fully explained by a lack of staffing at the CHP center that routed the call, or maybe the fact that the accident occurred near a county line caused some jurisdiction issues. I don’t know what the reason was. But as far as I’m concerned, the discussion shouldn’t get that far. This is the kind of problem that we shouldn’t have allowed to form in the first place. It’s as if we’ve forgotten the fundamental reason why most of us keep cell phones with us at all times: to keep each other safe.

At its core, this is more a political issue than a purely technological problem: more money needs to be routed to the right places. But at the same time, there’s no denying that technology plays an important role here — the call routing systems could probably be made more efficient. Calling filters could be improved. Perhaps the system could detect when multiple phones were calling from the same area and inform callers that an accident had already been reported. Whatever the answer, things need to change. And given how upset we get over homepage redesigns and SMS fees, why not exhibit a bit of outrage when technology fails us in a matter of life or death?

As one final note, I hope this doesn’t come across as an attack on the men and women who staff emergency call centers, or the law enforcement officers and paramedics who respond to the scene. I have the utmost respect for everything they do. I just wish that the infrastructure supporting them was as up to the task as they are.