A group of Movable Type specialists – some of them former Six Apart employees – wanted to speed up the development of the open source version of the popular publishing platform and decided to group together in a quest to build an independent, community-driven CMS for bloggers and other publishers.

The platform is dubbed Melody and will be managed by a non-profit named The Open Melody Software Group, which has Anil Dash (Six Apart’s outspoken VP and Chief Evangelist) on its board.

From what we can gather reading about the project on the website, its founders are passionate about Movable Type but see more value in forking it, community-style, “to see it flourish as a platform”. According to the FAQ section, the team is working together with Six Apart to some degree – which isn’t surprising considering Dash’ presence on the board – and strives for as much compatibility with Movable Type’s core APIs as possible. However, you can also read that the team is inspired by successful open source initiatives such as WordPress (a Six Apart rival), Apache, Linux and Firefox.

“While at its onset Melody will have a great deal in common with Movable Type from a feature perspective, we believe that by listening to and empowering our community we will unlock the true potential of open source and begin to advance the platform at a more rapid pace. To that end we intend on decoupling features that add complexity to the product, yet only a minority of users use, e.g. TrackBack and Postgres support, and increasing the level of investment in those areas that will help people become more efficient and successful in designing and building web sites using Melody, like theme building and distribution.”

As for the product, it’s not ready yet, even for beta testing. The first release (Melody 1.0) is scheduled for ‘Fall 2009’, but if you’re a developer and you can’t hold your horses than you should check out the latest development snapshot from Melody’s source code repository on Github. 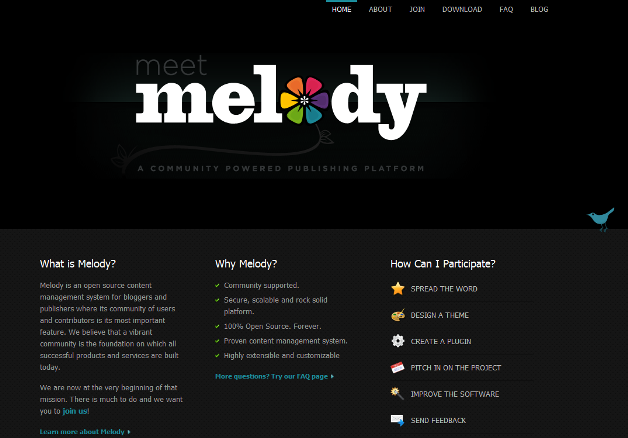