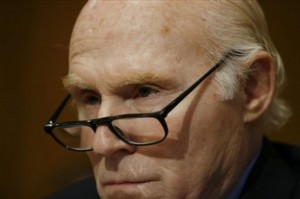 Let’s roll back the clock to September 9, 2008: on this dreary D.C. morning, Senator Herb Kohl (D-WI), head honcho of the Senate Antitrust Subcommittee expressed some concerns in a press release regarding the sharp jump in the price of sending and receiving text messages.

Text messages were commonly priced at 10 cents per message sent or received in 2005. As of the end of the month, the rate per text message will have increased to 20 cents on all four wireless carriers. Sprint was the first carrier to increase the text message rate to 20 cents last Fall, and now all of its three main competitors have matched this price increase.

Now, more than nine months later, representatives from Verizon Wireless and AT&T (oh, and Cricket was there too) have appeared at a subcommittee hearing to talk texting.

The big story here is that there were concerns of collusion: Randall Milch (Executive Vice President, Verizon) and Wayne Watts (Sr. Executive Vice President, AT&T) have both vehemently denied that they jointly set text messaging prices. Instead, they claimed, the price hikes were independently decided upon, andaffected only a small number of customers. It sounds plausible: a majority of text messages sent are from a bucket plan offered by the carriers, and Verizon and AT&T execs have claimed the price hike has only affected 17% of their collective customers.

Still, those rising text prices are also raising concerns that carriers are trying to shoehorn customers into messaging packages in an effort to bring in more revenue. Sen. Kohl wondered why most carriers seemed to want to increase prices, instead of cutting them in order to make them more competitive. Competition, however, is something that doesn’t seem to be in short supply in the wireless industry if Milch and Watts are to be believed. Text messaging is only one factor people take into consideration when signing up for service, and their respective companies and heading into a cellular battlefield this summer to fight for the hearts and wallets of potential customers.