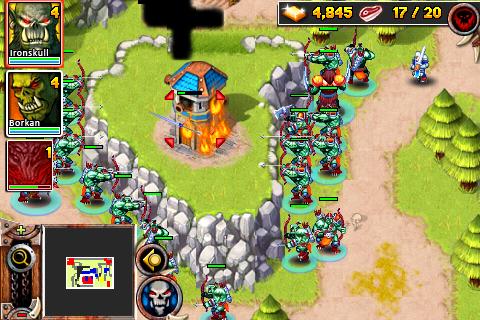 If you want an action/adventure RPG worth its salt, look no further. Gameloft’s Rise of the Lost Empires has everything you need! I loved this game and played it so obsessively for the last few days that I developed a severe case of cell phone elbow. This game has awe-inspiring graphics and dazzling gameplay. Aside from some extremely minor performance issues, Rise of the Lost Empires took full advantage of the iPhone’s unique multitouch capabilities. Gameloft has definitely delivered an outstanding product.

If you’re a nerd like me, and love fantasy/adventure RPGs, you’ll be delighted with Gameloft’s Rise of the Lost Empires. In the game, much like a full-fledged real-time strategy (RTS) game, you play God and are tasked with developing an economy and an army to take on the enemy. You build farms to earn money and to increase the total capacity of your army (the more farms, the more soldiers you can have). There are 10 different types of buildings, ranging from towers that can mow down incoming enemy combatants to a barracks to train simple infantrymen. But this is not a true RTS, because you still have a main character in each mission (the hero, described in the next paragraph) and the main character can often complete the entire mission without developing your army at all. Also, it hardly has the expansive environments and long, hard-fought battles of a true RTS. Rather, it is more of a hybrid of an RPG and an RTS: think of it as the best of both worlds.

The aforementioned heroes are the focus of the plot line (which is, admittedly, generic and uninteresting). Each hero has a series of magical powers which you can use for a variety of purposes, including launching a meteor shower on the enemy or regenerating your health. The magical powers added an incredible element of depth to the game; I found myself laser-focused on the screen during battles because I didn’t want to forget to use a replenish charm when my hero’s health was low or an attack spell when he was duking it out with a powerful arch-nemesis. There were 6 total heroes and they each had a few spells, so there was plenty of diversity in case you tend to get bored quickly. 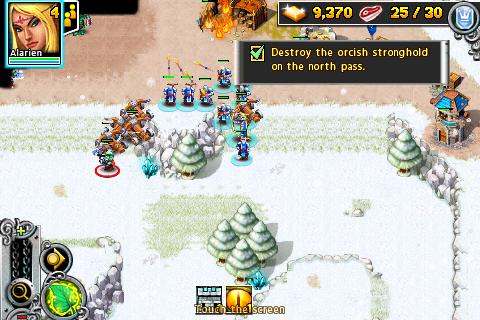 There are 2 campaigns with 10 chapters each, for a total of 20 chapters worth of gameplay. Some chapters were more challenging than others, and Lost Empires definitely provided a lot of variety from chapter-to-chapter. Sometimes you have to complete a task within a time limit, at other times you just have to destroy all of the enemies on the map. You’ve got to be a pretty straight arrow if you aren’t engaged throughout the 20 chapters. The 2 campaigns let you feel both sides of the battle: you first start as humans and try to destroy the Orcs, and then switch. Though the races are basically the same, you still feel like the game is changing due to the shift in the storyline and, most importantly, the heroes.

The controls are awesome, for the most part, but there were some issues. Instead of using the multi-touch to zoom, it’s used (by pinching the screen with your fingers) to select units that you want to control. You tap the screen to select items, which I found sometimes required a double-take. The biggest problems with the controls related to a game feature in which you select a hero to “lead” a group of units. Oftentimes, the game would select the wrong hero and I could not figure out why. This may not sound like a big deal, but given that some heroes have healing powers and others don’t, it definitely caused me to lose a level or two. 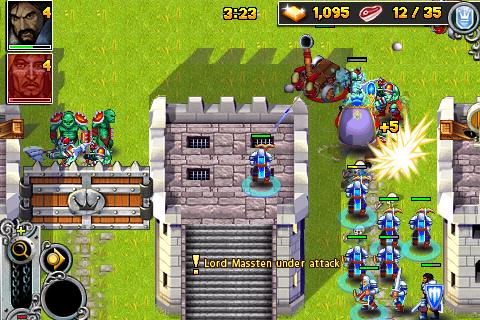 And then there were the graphics. Holy moly are they well done. The design team should just pat themselves on the back right now, because the artwork is stupid good. The environment and buildings are intricately drawn, the colors are vibrant and captivating, and the characters just plain rock. There isn’t much else to say – look at the screenshots. If you’re not impressed, then God help the next design team trying to make your jaw drop.

Overall, Gameloft’s attempt to recreate the classic Rise of the Lost Empires was a superb success. It packs plenty of punch to deserve the $4.99 price tag. If you ever wondered if an RPG could be successful on the iPhone, wonder no more: Gameloft has answered the call and produced a hit. We loved it, and think you will too.