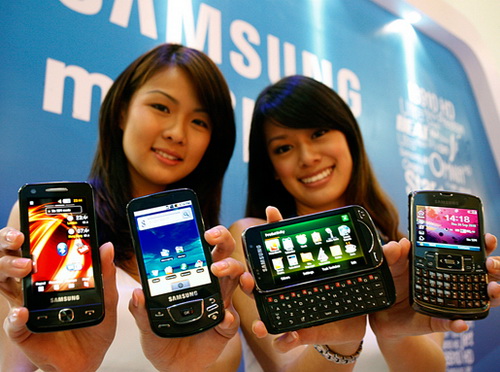 Today at an event in Singapore, Samsung Korea officially launched four new handsets to the market. The flagship of the four phones introduced was the Samsung B7610, a part of Samsung’s Omnia brand of smartphones. The B7610 comes with a 3.5-inch AMOLED touchscreen display (800×480 resolution), a slide-out keyboard, a 5.1-megapixel camera, 1GB of memory, FM tuner, Wi-Fi, TV Out, and GPS, according to Akihabara News. The B7610 will run Windows Mobile and will surely attract crowds of gorgeous Korean chicks to owners everywhere. It was showcased alongside three other equally average smartphones: the 12-megapixel Samsung Pixon 12 M8910, the Samsung Jackie B7320, and the Android powered I7500.

Also known as the Omnia Pro, the Samsung B7610 Louvre will come with the following specs, courtesy of Soft Sailor: