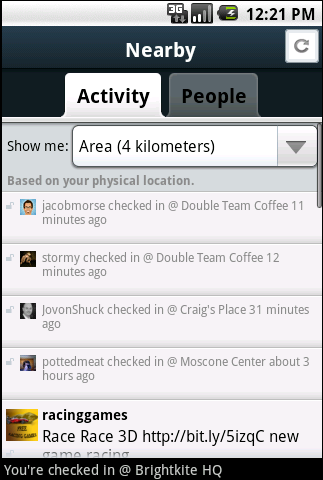 The Android userbase may not be quite as big as that of iPhone OS – but man, they are one loud bunch. More so than any smartphone platform past, users of these two operating systems tend to consider themselves rivals of sorts; if you release an application for one, users of the other will begin to clamor almost immediately.

It’s been about 8 months since the launch of their iPhone app, but geo-centric social network Brightkite is about to hush the calls of Android-toting Brightkite users everywhere. Brightkite’s CMO and Co-Founder Rob Lawson just wrote in to let us know that Brightkite’s Android debut should be submitted to the Android Market within the next few days, hopefully going live to all sometime within the next week.

We’ve just cracked open a big barrel of Brightkite beta. Read on for our first impressions – or better yet, read on to find out how you can get beta access as well.

First Impressions: If you liked what you saw of the iPhone app, you’ll probably like the Android app just as much – if not more. At first glance, I thought the Android app was missing a ton of functionality – that is, it seem that everything that’s placed in the row of tabs at the bottom of the iPhone port, such as Friends, the “Nearby” search function, Messaging, etc, was absent. Then I remembered that Android handsets have the advantage of a “Menu” hardware key. Pressed that – sure enough, everything I was looking for was tucked right in that little slide out drawer. It’s a great design decision; when it comes to designing for tiny mobile handset screens, every pixel counts. Moving these navigation items behind a single button press frees up about 15% of the screen real estate. 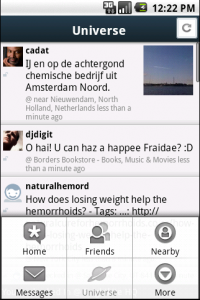 The application’s interface is dead simple, whilst still providing just about every bit of Brightkite-based functionality you’d expect of it. In fact, we’re having a hard time finding anything you could do in the full-blown Brightkite web interface that you couldn’t do in this app. Check ins? Of course. Messaging? Yep. Search, friend management, even stuff as trivial as editing your profile picture – it’s all here.

The interface is well polished, and the functionality is exhaustive – so is it perfect? Not quite. Just like most older brothers, the iPhone port is quite a bit faster than its fresh-faced Android sibling. The only time the Android app seemed quicker than the iPhone version was during the initial startup; after that, most actions took 2-3x longer. Of course, the iPhone release has been around for 8 months, and we’re dealing with beta software on the Android end. Chances are there’s some room for optimization.

You’re probably tired of hearing us blabber on at this point. iPhone this, Android that – you get it. You just want to play with it yourself.

Fortunately, that’s pretty easy. Brightkite has sent over a few scannable QR codes which will get anyone with an Android phone into the beta. Here’s how: 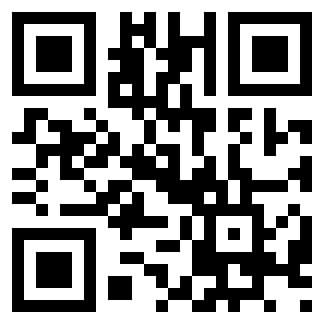 If, for some reason, you’re still on Android v1.1: 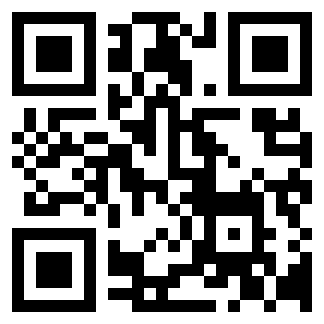 Disclosure: Brightkite’s competitor Loopt should be considered a TechCrunch sponsor, and Brightkite helped pay for the booze at a recent Crunchgear reader meetup.