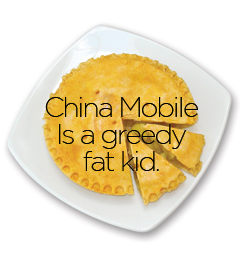 China Mobile, you’re doing it wrong. TelecomAsia reported that China Mobile, the world’s largest mobile phone operator, wants a big slice of the app revenue pie. Real big. They seek nothing less than 50% of all revenue generated by mobile apps from third-party developers. That’s considerably larger than the likes of Apple and Google’s Android, which both limit their cut to 30% of the generated income from app sales. China Mobile, moreover, hasn’t figured out how to build incentive for developers to focus on their products, so taking such a big cut is a slap in the face at best.

China Mobile is opening their store-front to all of their mobile operating systems, aside from the iPhone, which has exclusivity with Apple’s market. The people of China can expect to see an empty marketplace when it launches on their phones in September of this year.