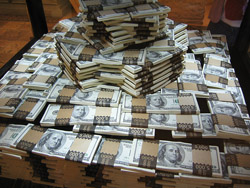 Facebook is taking that rumored $200 million investment from Digital Sky Technologies, a Russian investment group. DST will take a 1.96 percent stake in the company, giving Facebook a $10 billion valuation. Facebook ultimately did not have to give up a board seat to DST in return for the cash. But DST is getting preferred shares for it’s $200 million.

When Microsoft bought preferred shares, it valued Facebook at $15 billion. Since then the market has come way down and various valuations for Facebook have been thrown out between $4 billion to $6 billion. And recently, Facebook turned down an investment valuing the company at $8 billion, with the stipulation that the investor get a board seat. During a conference call today, CEO Mark Zuckerberg he confirmed that other investors had approached Facebook, saying: “It was really at our option to find someone we wanted to work with on our terms.” No doubt, part of the appeal of taking the Russian money was to set the company’s new valuation at something easier to stomach than what the common stock was going for in private sales.

But this investment may affect the valuation of the common stock as well. Additionally, DST has the option to buy another $100 million worth of common stock from existing employees and investors. Although, during the conference call, the suggestion was made (update: confirmed) that these are being treated as two different transactions with different valuations. Facebook announced a program last year to let employees sell some stock to private investors, but that program was put on hold. Facebook hopes to give some of its employees liquidity with this separate deal with DST, which it views as a long=term investor.

Despite recent public statements from COO Sheryl Sandberg saying that Facebook does not need the money, it can certainly use the cash to fund its growing operations, including bandwidth, storage, and engineering costs.

During a conference call, CEO Mark Zuckerberg says that the investment will give Facebook “a good cash cushion” and give the company more flexibility “for strategic options” (which is code fro acquisitions), although he also says the company has “no plans currently.” It is not clear that $200 million is enough to buy the company it really wants to buy (Twitter!). Zuckerberg adds: “This investment is purely buffer for us. It is not something we needed to get to cash flow positive.” He expects Facebook to be cash flow positive in 2010, and says the company has been EBITDA positive for five consecutive quarters, going on six.