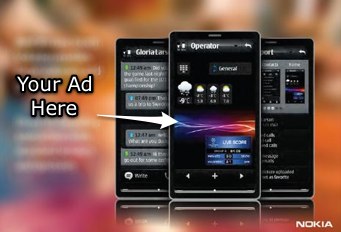 If your carrier offered to take a hefty chunk of change off the cost of a mobile handset be it that you let them put advertisements on the home screen, would you take the deal? Nokia thinks you might.

Our source deep within Nokia’s headquarters has just leaked us a bunch of information about the company’s future operating system release, Maemo “Harmattan”. It’s jam-packed full of unexpected twists, including their new-found love for home screen ads.

Update: We’ve got a screenshot of Maemo Harmattan now.

For the sake of everyone unfamiliar with Nokia’s wares, a quick overview: though they primarily use S40 and Symbian S60 across their mobile handset line, Nokia has been working on an operating system called “Maemo” for a few years now. Thus far, Nokia’s reserved it exclusively for their Internet Tablet line, though recent rumors have indicated that they are considering bringing it to mobile phones. Sometime soon, Nokia is expected to launch the fifth iteration of Maemo, codenamed “Fremantle”. Following that build will be Maemo “Harmattan”. Beyond that it would bring support for the Qt development framework that Nokia acquired in 2008, little is known about this build – until today.

Right off the bat, our source confirmed that Maemo was indeed headed for at least one Nokia phone. In fact, they say the eventual plan is to use Maemo to phase out S60 all together – though they do admit that based on Nokia’s history, this is unlikely to happen any time soon.

Here’s everything we know so far:

Would carriers play along with this idea? Perhaps. While we were digging for independent confirmation of these details, another source pointed out that Pekka Ala-Pietilä, President of Nokia until 2005, left the company to start Blyk. As it just so happens, Blyk is a mobile operator in the Netherlands and UK which gives customers free texts/minutes each month in exchange for ad views. At the very least, this shows that there are carriers out there willing to experiment with the concept.

We are expecting to have at least one shot of Maemo Harmattan to share within the next few hours – so check back soon. (Note: The UI shown in the shot up above isn’t Harmattan – just a concept that trickled out from a Nokia presentation a few months back.)