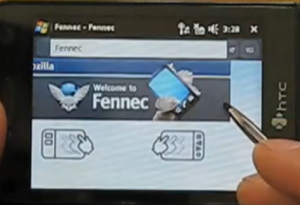 After the slightly shaky launch of their ultra-early milestone one release, Mozilla is back with more Fennec (otherwise known as “Firefox Mobile”) goodness. This morning, the company began distributing Alpha 1 of Fennec for Windows Mobile. As with all Alphas, this release is by no means intended for every day use by the general public, but it gives us a sneak peak at what’s to come.

What’s new in this build:

Being that it’s an Alpha, its not nearly perfect. Mozilla cites a few bugs for themselves, noting that performance is a bit shoddy and panning is laggy. As long as that “Checkerboard” bug that plagued nearly everyone’s test runs in the milestone have been fixed (where, upon launching Fennec, nothing was displayed but a checkerboard pattern), we’ll forgive’m for these other little bugs.

Though Firefox has seen great success on the PC (over 50% of MobileCrunch readers use it), the mobile space is rough territory. A significant chunk of mobile users have no clue how to install software on their handsets, especially as a number of carriers block the installation of software through the browser. As such, many simply stick with the default browser. Of those that do know how (and want) to switch away, Opera Mobile is already well established as an alternative browser of choice, with Skyfire (and its Flash-playing capabilities) hot on its tail.

Only the HTC Touch Pro (and presumably the AT&T branded Touch Pro, the Fuze) is currently supported, though it might just work elsewhere. If you’ve got a Windows Mobile handset running at a resolution of 480×640, it’s worth a shot. You can find the CAB files for installation here.

Don’t have a compatible handset, but still want to take a look? Check out the video walkthrough below:

Fennec – alpha 1 for Windows Mobile from Madhava Enros on Vimeo.