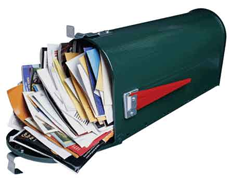 I love my iPhone, but I’ve always harbored some contempt for its built-in Email application. Not because of the occasional message download issues and display quirks, but because the iPhone’s Email application has absolutely no search function at all. Given how much essential data is now stored in most peoples’ inboxes, from phone numbers to flight confirmations, this has been an endless source of frustration.

Today, these problems are solved: a new Y Combinator startup called ReMail has just released its application on the App Store, and it’s bringing full text Email search to the iPhone. The application is currently free during its Beta period, and you can grab it here.

Now, I know the first response people will have is that the upcoming iPhone 3.0 update is going to include Email search as part of the new Spotlight feature. This is mostly true – 3.0 will allow you to search through Email headers, which include the message’s subject line and its ‘To’ and ‘From’ fields. But that’s only half the battle. Spotlight omits the actual Email message, which accounts for a sizable chunk of an Email’s content.

So how is ReMail doing what Apple can’t? The company has built a server optimized for rapid Email search, which the iPhone client connects to and grabs results from in a few seconds. It works exactly as it should, offering suggestions as you type your query and presenting matches as threads so you can see the context that a result was found in. If you search for “Jason inbox”, it knows that you’re looking for a person named Jason in the folder “inbox”.

While the application requires internet connectivity if you want to search through your whole inbox, for most queries you won’t need a connection. ReMail has built in smart caching that locally stores all messages from the last two weeks, as well as any messages you’ve previously searched for (people often search for the same messages multiple times to look up things like phone numbers). 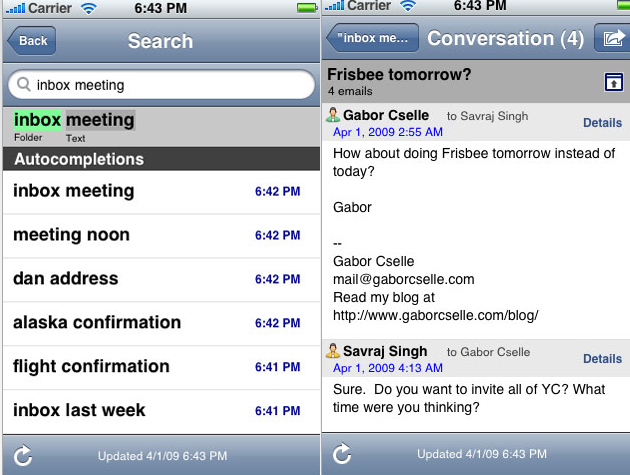 My initial reaction to the app was that it was great, but that it seemed to have a short shelf life – couldn’t Apple just update the 3.0 firmware to include full-text search? But CEO Gabor Cselle says that the iPhone simply can’t handle it in its current form. Even if the phone had an index of your Email stored locally (which would be costly in storage space), Cselle says that the iPhone doesn’t have the processing power to quickly scan through multiple gigabytes of messages.

ReMail was founded by Gabor Cselle, who completed his Master’s thesis on Organizing Email, worked on the Gmail team, and was also VP of Engineering at Xobni, which he left last year to pursue his own company. The company’s backers include Paul Buchheit and Sanjeev Singh, who built a little application called Gmail (they also co-founded FriendFeed). These guys know what they’re doing.

But there are some caveats that may keep some people from using ReMail. There are a few UI quirks (it appears that the client doesn’t render HTML), and the maximum inbox size is 10,000 messages, which is smaller than some users would like. It would also be nice if the app could serve as a replacement to Apple’s mail application (you can forward and reply to messages in ReMail, but for some reason you can’t compose a new one).

The biggest issue, though, is privacy. ReMail works by sucking in your messages from your IMAP server and hosting them on its own server, which is optimized for rapid searching. Cselle says that the server is secure and that all messages are encrypted, but acknowledges that ReMail does have access to your Email. The company vows never to access or read any of it, unless they are given written permission to do so in the case of a support issue. That may not be enough for some people, especially those who deal with confidential information on a regular basis, but for most people it probably isn’t a show-stopper. It’s also worth noting that the same issues are associated with many other startups that host your private data.

The application will stay free throughout the ReMail Beta, with plans to switch to a $3.99/month subscription plan later on.