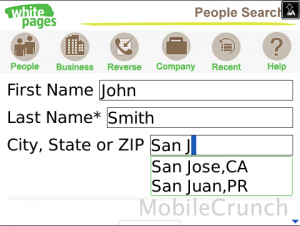 Good news, BlackBerry users! Never again will you need to kludge around in your browser just to dig up a number or determine who’s behind the number that just called. Following the success of their iPhone and Android applications, WhitePages will soon be announcing the upcoming availability of a native BlackBerry application.

It’ll still be a few days before the app makes its way to the BlackBerry App World, but we’ve been tinkering with a pre-release copy for a few days now. 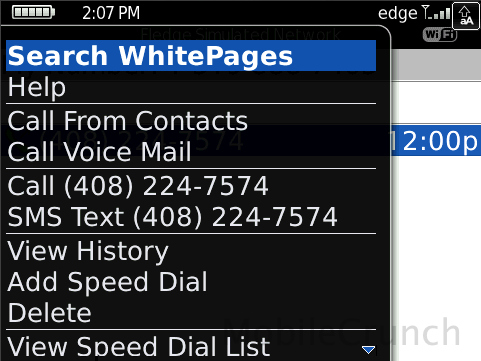 Due to a limitation of the BlackBerry OS, one feature we’ve grown fond of in their Android application won’t be making an appearance: real-time CallerID for incoming calls. They’ve worked around this as best they could, adding a quick link to the reverse search function from within your BlackBerry call log. Highlight the number, hit “Search WhitePages”, and it’ll do the heavy lifting. It’s not nearly as handy, but it’s the best they can do within their boundaries 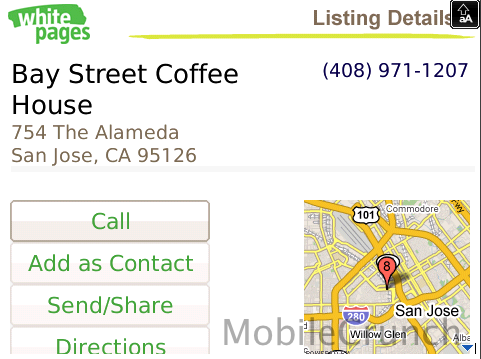 They’ve integrated the application into the OS in other ways, as well. From within any listing, you can initiate a call, add a contact, send the details via email, or get directions via the built-in BlackBerry Maps application.

The application seems rock solid overall, and does just about everything you might expect – or, at least, it does everything the iPhone port does (plus an extra trick or two). Unlike the iPhone app, however, the BlackBerry version won’t be free. Fortunately, it’s not going to be too hard on the wallet; at $6.99 for 6 months, the per-month cost comes in at under $1.17. This app has just been submitted to the BlackBerry App World, so it should be available within the next few days. Initial availability will be limited to the BlackBerry Bold, though versions for the Storm, Curve, and Pearl will be released shortly thereafter.

Be sure to check out the full image gallery and video demonstration below.