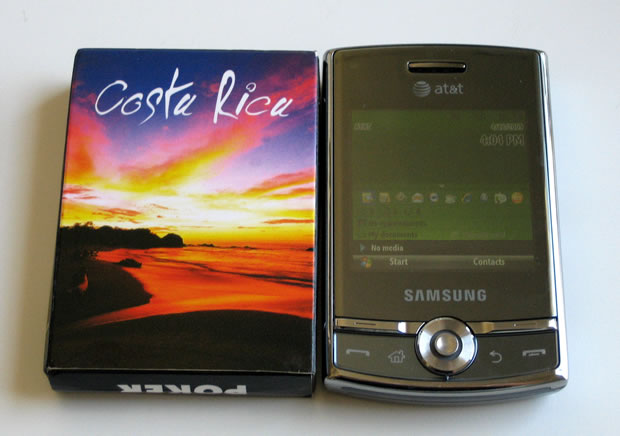 As of last Tuesday (04/14/2009, for you number people), AT&T released its Samsung Propel Pro WinMo 6.1-based slider phone to the masses. Having received my tester unit a bit earlier, I’ve been putting the device through its paces for just about a week now.

My initial gut reaction after charging and powering the ‘Pro on was “ok, I’ve got to ignore the WinMo 6.1 Standard OS and focus on the device itself.” In that regard, this thing ain’t half bad.

Let’s start with the good. The down-to-business, chrome-clad phone feels very sturdy (if not a bit hefty, more on that below) and is a good, pocketable (smaller than a deck of cards) size @ 3.9 x 2.4 x 0.60 inches. The slide-out QWERTY keypad has a nice spring in its step, if you will, complete with a commanding thud on either end of the sliding mechanism. The Propel Pro’s 2.55″ 320×320 65k-color display which is very clear (for its kind) and viewable from most any angle.

Perhaps one of the most pleasant surprises is the 3 megapixel AF (macro-capable) camera, which is operated by a dedicated “camera button” on the side of the device. For a non-camera-centric phone, its image quality is pretty impressive. The Propel Pro takes solid snapshots and watchable (albeit small) video clips (samples below) that can be saved on either the phone’s 10MB internal memory, or on a microSD card (up to 16GB – not included; for some unkown reason, I was unable to insert a microSD card into my tester unit). Unfortunately, there is no flash and only a 2X zoom (which doesn’t operate while using the camcorder function). However, Samsung has at least given users some control over their photos with a range of exposure (+/-) settings, single and multi-shot modes, 7 different “scene” modes, 4 different resolution options, white balance controls, 4 different ISO settings, 2 metering modes, and even black & white, sepia, and negative effects. My biggest gripe re: the camera, which is the same for most all slider phones, is the fact that you have to have the keypad slid out to use it (otherwise its hidden).

Now for the not so good. If WinMo 6.1 is your thing, then that’s cool, we just totally disagree. I’m not gonna waste any more words (after these few) panning the OS, and in fact will ignore its functionality all together as its generally the same experience on any device. In any case, the Propel Pro’s speed/responsiveness is rather hit or miss (considering its rather decent 528 MHz processor and 128 MB of dynamic memory) depending on the particular application in use and whether you are using AT&T’s 3G or WiFi. I wouldn’t go so far as to say the phone is sluggish (cause it’s not), but its not definitely not the quickest responder either. In re: to WiFi, the phone is pretty good about picking up available signals, and connects alright, but tended to be somewhat finicky after a lull in use.

I’ve got mixed feelings about the slide-out QWERTY keypad: on the one hand, I’m definitely glad its there (duh, its not a touchscreen device!), but on the other, the keys are really pretty small and made out of a somewhat slippery plastic. As for the directional-controller, I’m not the biggest fan. At times, it feels somewhat loose and overly sensitive, but again, its a necessary evil given the form factor. And finally, back to the previously mentioned heft. I am all for the phone feeling solid, which it does, but for some reason, it feels a lot heavier than it looks and is definitely noticeable (the weight, that is) while in a pants’ pocket.

Oh, I guess you might also want to know about the device’s operation as a phone, as well. Call quality was fine – nothing amazing, nothing terrible. Although, sometimes I would notice something that I can only describe as some sort of noise canceling where if the person at the other end paused it’d get noticeably quieter and then get louder as they began to talk again. As for battery life, its rated for up to 6 hours of talk time and up to 12 days of standby. Unfortunately, I’m not sure whether I happened to set the phone on some “crazy battery eating” mode, or what, but after the initial first charge, which lasted a reasonable 2.5 days with mixed use, the phone on full charge, now doesn’t even seem to last a day. [Pretty sure this isn’t “normal” – AT&T could definitely have inadvertently sent over a faulty battery, its not clear what the issue is at this point.]

All in all, this ain’t a bad choice for anyone who likes/can deal with WinMo, enjoys the slider form factor, wants decent photo/video capabilities, and doesn’t want to break the bank (read: $150 after MIR) to have such luxury features like 3G, GPS, email, IM, web browser (do yourself a favor, download Opera Mobile – IE Mobile is the devil), speakerphone, WiFi, and stereo Bluetooth, to name a few.