Sports-blog network SB Nation is now officially sanctioned by the NHL. Posts from its 29 hockey blogs now appear as linked headlines on the homepage of NHL.com. CEO Jim Bankoff, a former AOL executive, tells me that he is in discussions with other major sports leagues for similar link deals. You’d think that investor Ted Leonsis, the former AOL vice chairman who owns the Washington Capitals, helped make some introductions at the NHL. But Bankoff says that wasn’t the case. We’ll see if the other leagues bite.

If they don’t do it already, the official sites of the various sports leagues like the NFL, NBA, and MLB should definitely consider adding sports blogs to the mix of information they make available on their sites. I am not sure how many true sports fans trust the sanitized news you typically find on those sites, but they are a good starting point. Adding some blog coverage might make fans feel the leagues are at least open to more points of view. It shouldn’t be limited to one blog network either, but I can see the appeal of handing those links over to SB Nation and letting them deal with quality control.

SB Nation pulls together what amounts to local sports coverage under a single advertising umbrella (although professional teams have fans everywhere). The wider it can distribute links in places where sports fans might gather online, the more readers it should be able to expose to its various blogs. Last year, SB Nation raised $5 million from Accel Partners, Allen & Company, and Leonsis.

Bankoff says SB Nation is up to 5 million unique visitors a month across its network of about 200 blogs, based on internal metrics, and he says that is growing at a rate of 20 percent per month. 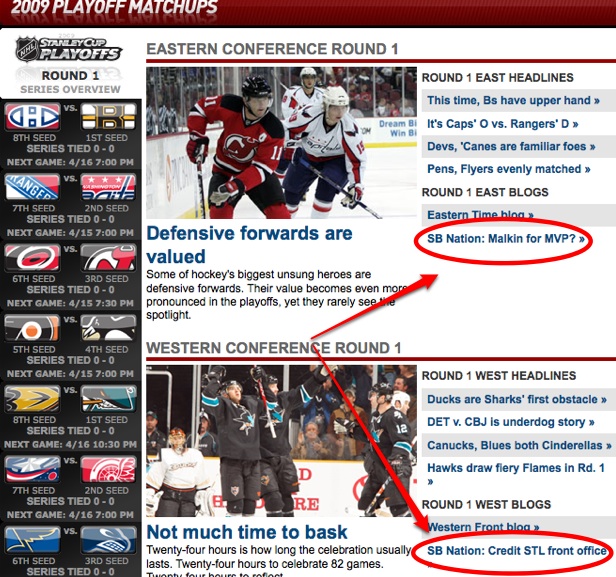