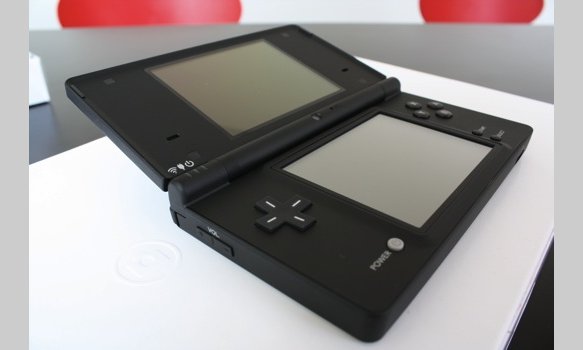 The question on everyone’s mind since October 2, 2008, has been whether it will be worth upgrading to the DSi from the DS Lite, right? We’ve all seen the countless videos coming out of Japan about the DSi’s new features and I’m sure most of you have already made up your mind by now, but if you’re on the fence then I hope this review helps.

The DSi’s hardware is leaps and bounds ahead of the DS Lite. The screens are 0.25 inches bigger and a bit brighter than the DS Lite. The power switch is now a power button and serves as a reset to take you back to the DSi Menu, so you don’t have to restart every time you want to get back to the main menu. The matte finish offers better grip than the previous edition, but it’s prone to oily smudges so keep your hands clean.

Nintendo was all abuzz during the original announcement of the DSi because of the two VGA cameras that were added in this iteration. With a slogan like, “What will you and “i” do?,” it’s fairly obvious what Nintendo’s goal is for the DSi. They’re hoping to make the handheld device just as social as the Wii. The first US DSi commercial is evidence of that.

Either bumper activates the internal camera from the main menu, which you can switch to the external after launch. It may not be Nintendo’s intention to eliminate your camera, but both VGA cameras aren’t that bad. Considering Japan’s obsession with sticker picture booths it comes as no surprise that the picture editing software lets you edit images to add borders, cat ears or Mac-like Photo Booth effects. If you haven’t seen the first US commercial then check it out to see some of the editing software’s abilities.

I was never quite satisfied with the DS Lite’s speakers and I’m happy to report that the DSi’s speakers are loud and clear. They’re also much more conspicuous. By adding an SD card slot, you can now ditch your MP3 player if you’re looking to travel light. DSi Sound allows you to manipulate your music by adding sound effects, changing pitch or overlaying your own recorded snippets. Other effects include filters, like, radio, instrumental, echo and 8-bit game. Visual effects are played on the top screen that include playable Super Mario and other visual treats. The parakeet that lives inside offers tips and repeats your recorded tracks, which is a bit creepy.

The Opera powered DSi browser works just as you’d expect. You can check out the video I took the other day if you’re wondering how both screens work for browsing. However, I’ve been notified that my device memory is too low to display certain pages even though I’ve only been to one or two sites.

Let’s be honest, the DSi Shop is totally worth the $170, but Nintendo decided to ditch the GBA slot, which is a bummer for anyone that has an archive of GBA games or newer games like Guitar Hero: On Tour that uses the GBA slot for the accompanying grip. However, I’m hoping the rumors of a Virtual Console for the DSi are true. Download speeds will depend on your Internet connection, but all my downloads averaged a minute or less. And each game or app can be stored on the DSi or SD card. And don’t forget that you’ll receive 1000 free DSi Points by purchasing on or before October 5th of this year.

Of the five DSiWare titles available, I’ve downloaded all but Master of Illusion Expres: Funny Face. I’m not that enthusiastic about the games that utilize the camera, but the WarioWare title seemed like a must have to show others what the new handheld and software is capable of. Let’s hope Nintendo pushes out some more titles and apps in the next month because the existing lineup isn’t appealing to everyone, but Bird and Beans and Art Style: AQUIA are my favorites of the bunch.

My review thus far probably sounds like a big endorsement for the DSi, but it’s not perfect. Battery life is considerably shorter than the previous generation by a few hours and nixing the GBA slot eliminates the use of all previous accessories that one might have purchased. The battery is user replaceable and I’m positive that larger capacity batteries will hit the market soon. But I can honestly say that those are the only two issues that I have with the DSi.

As cheesy as the photo editing and audio software are, they’re neat to have and use. The Web browser is now included, which eliminates the need to spend another $30 or so unless you’re the homebrew type. The DSi Shop has the potential to be huge, but only time will tell what Nintendo has in store for us. If you currently own a DS Lite, then I suggest you wait around for a bit to see what happens with the DSi Shop. If you have an older model or you don’t own one at all, then, by all means, go out and purchase one immediately.