Apture, the startup that lets online publishers enhance content with pop-ups that carry rich media from a variety of sources based on the context of linked words and terms, has scored a healthy $4.1 million in Series A financing from Clearstone Venture Partners and a number of angel investors including Paul Maritz (CEO of VMware) and Steve Taylor (former Executive VP of the Boston Globe). The service was first launched in June 2008 and has much improved since then.

Online publishers can use Apture by simply inserting a line of Javascript code after creating an account, which allows them to link words and phrases to a HTML-based overlay that acts like a minitiature browser that enables readers to find and explore related multimedia content without leaving the original page. Note that this only works when you’re actually on the equipped page, not in the RSS feed, and that the functionality is not supported by WordPress.com. 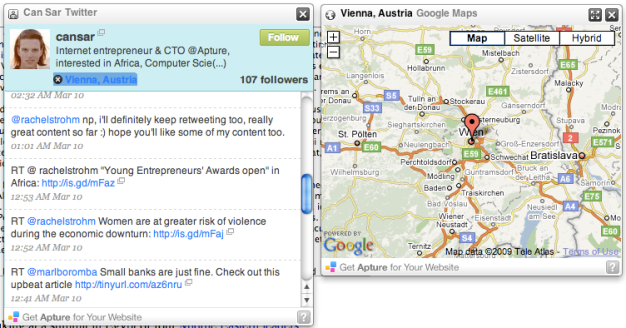 You can see Apture in action by clicking through to this Washington Post article. Just hover over the names of U.S. Senators with a little icon next to them, and the widget should pop out automatically. I only wish it wouldn’t scroll the article up or down when it opens a pop-up, but I find it surprisingly non-intrusive besides that.

New is that Apture now also supports adding rich media links to content that hasn’t yet been published (something that wasn’t possible before and probably slowed down its adoption a bit) thanks to the addition of plugins for Blogger, TypePad, WordPress and MovableType.

They’ve also just released a neat integration with Twitter, so that you can easily link @username or #hashtags to Twitter streams in blog post or news articles, which is an excellent feature if you ask me. Read more about it here and hover over the account of Sen. John McCain in the blog post to see how it works.

Apture is free of charge for bloggers and online publishers with less than five million page views per month. More pageviews means you have to pay to use the service, but that’s not the core of Apture’s business model, which is centered around charging publishers for premium features, integration of custom content sources, customizations, and priority support. On top of that, Apture runs its own advertising sales with display opportunities across its entire publisher network, and splits that revenue with those publishers.

Apture has already been tested by BBC, Reuters and the Washington Post, and The New York Times is also said to be experimenting with the service.