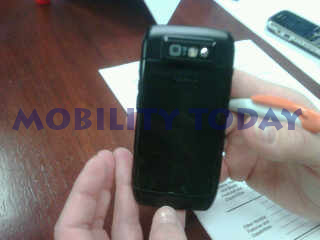 We were just starting to think that AT&T’s version of the e71, otherwise known as the e71x, had been canned. I mean, it’s been right around 5 months since it was last seen floating around, and it seemed like it was in good shape at the time. Can you really blame us for worrying?

Fortunately, it seems the device is alive and kickin’ – or at least, the guy who snapped pictures of it last time got bored and decided to shoot it again. The pictures aren’t nearly as nice this time, but they do show the backside for the first time. Surprise surprise, it looks just like the back of the E71 – but it looks like they may have dropped the metal back of the original in lieu of cheapo good ol’ fashion plastic.