AirBed and Breakfast, an online portal for renting space on a stranger’s airbed or couch, has re-launched its website to AirBnB, an eBay-like marketplace for all accommodations. Now a Y-Combinator start-up (the startup is currently in the winter session of the incubator), AirBnB, which launched as AirBed and Breakfast last August, found that users wanted to use the site for more than just renting space in someone’s house and were actively posting rental listings for apartments, houses and vacation rentals. The founders, San Francisco designers Joe Gebbia and Brian Chesky, and software engineer Nathan Blecharczyk, quickly realized that increased and varied choice is more appealing for consumers and are now re-branding their site to incorporate a variety of local accommodation options.

There is also a monetary benefit to opening up the site, says Chesky. For each rental, AirBnB takes a 7 to 10 percent cut of the traveler’s payment (as the rental price of the accommodation goes up, AirBnB will take less of a cut) and also takes a flat 3 percent cut of what the seller receives. With an increase in number of listings and a greater amount of pricier listings, AirBnB has had a jump in the number of transactions and seen a 50 percent jump in revenue plus created a profit. Vacation rentals can be a big business. Recently, HomeAway, a popular vacation rental site, raised $250 million in a venture round and was valued at more than $1 billion.

The site still allows users to post airbed and couch listings, which continues to be popular amongst consumers. But with a wider market, AirBnB has 2500 listings and close to 10,000 registered users. While AirBnB has no plans to follow eBay’s auction site model, the start-up would eventually like to post listings directly from the enterprise world (in this case, hotels and property managers), which eBay has been able to do with its marketplace.

Now that AirBnB is diversifying its accommodations, it will also face a fair amount of competitors in the rental space. Vacationrentals.com and Free-rental.com are just a few of the many short-term rental property listing hubs available for consumers. But AirBnB maintains that the combination of its former business of renting couches and the apartment and vacation rentals, all at relatively inexpensive price points, will make the start-up popular.

With the downturn in the economy wreaking havoc on expensive travel plans, inexpensive home rentals may become more popular amongst consumers. AirBnB provides relatively cost-effective alternatives to staying in a hotel. For example, I saw a listing for a nicely-furnished one bedroom apartment in Midtown for $160 per night. That’s not a bad deal for an entire apartment. And AirBnB offers rooms and couches in cities like Washington D.C. and Paris for under $20 per night.

And for of our readers who are looking for a place to crash or a vacation rental, AirBnB is offering $50 off any trip that is booked from now until Monday, March 9th. All you have to do is type in “TECHCRUNCH” when booking. 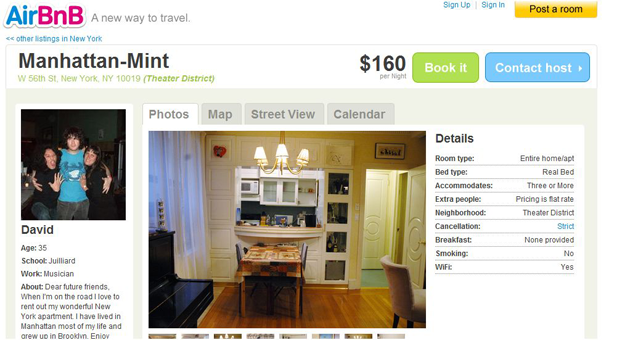