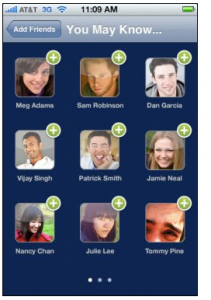 Social networks suck if you can’t find friends that use them. This is especially true for those social networks oriented around sharing your location; for the most part, you end up knowing where you and three other people are before you get bored and give up. Following a trend made popular by Facebook, the mobile social mapping service Loopt has added a “Friends You May Know” feature to their iPhone application, allowing you to find and follow friends-of-friends without having to know their mobile number. Fun new features don’t just write them selves, though, so Loopt has also added a few advertisements throughout the application for the sake of getting some revenue out of their iPhone endeavors.

Before this release, not knowing someones mobile number also meant you couldn’t be their friend on Loopt. You could always hop into “Mix” mode, which allows you to chat with people in your general area, but making that friendship connection still required asking them to send over their digits. With this new addition, you just need to know the mobile numbers for a few of their friends. Of course, if someone doesn’t want you to know their phone number, they probably don’t want you to know where they are, either – so you’ll still need their explicit approval.

The concept has proven quite successful on other services (friend counts seemed to sky rocket when the feature was added to Facebook back in March of last year), and it should prove especially useful for Loopt. A good half dozen or more services are battling for users in the social mapping arena right now, and Google’s entry into the field doesn’t make things any easier. Add in the fact that the entire concept is fairly new and relatively foreign to most, and Loopt needs to make every possible connection as easy to discover as possible.

As mentioned above, this is the first iPhone Loopt release to carry advertisements. Nothing too obtrusive here – they went with AdMob ads, which most iPhone users should be perfectly used to seeing just about everywhere.

Oh, and the mandatory disclosure: Loopt built a special version of their application for TechCrunch users, and we consider them a sponsor. The TC’d version doesn’t carry the new friend finding feature yet unfortunately, but it should find its way in before too long.

You can find Loopt for iPhone on iTunes here. [iTunes Link]