Xoopit, a social networking email enhancement that allows users to locate files, images and videos in their inbox, has launched a new feature that lets Gmail users immediately see and set Facebook status messages and view profile photos of their Facebook friends while reading emails off a Gmail account.

Users can also quickly see other information such as birthdays and mobile phone numbers. After downloading the feature, a user can easily update their own status directly from a Gmail account using Facebook Connect. Xoopit’s new feature is pretty neat and gives users the ability to bounce between Facebook and Gmail accounts seamlessly. And Facebook’s status message feature is one that most users check most frequently, so its particularly useful to the average Facebook user.

It doesn’t appear that the Xoopit-Facebook feature is available to Yahoo Mail users but the Yahoo and Xoopit may not be far away from developing a Gmail-like relationship with Yahoo, as we wrote about late last year.

The plug-in was a bit buggy when I downloaded it but I think its a nifty tool as a whole. It certainly saves me the time in switching back to Facebook to check status updates or update my own status. Now if only we could stream the news feed feature into Gmail.

Here’s another screenshot of the new feature: 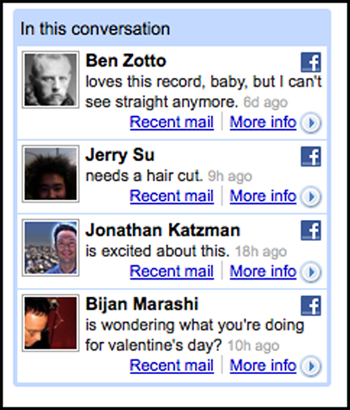