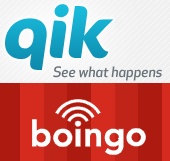 Like all mobile video broadcasting solutions, Qik works at its best when it’s granted access to a nice fat WiFi pipeline. But beyond their living rooms, their local coffee shop, and that one street corner where they can pick up WiFi signal if they hold their laptop just right, most people don’t have a very wide array of WiFi spots available to them – not without hotspot-by-hotspot fees, at least. Looking to make full-breadth broadcasting on the go a bit more accessible, Qik and Boingo Wireless, a nationwide WiFi provider, will be announcing a partnership later today.

Under the partnership, Qik users (or anyone who makes use of the Qik-themed signup page) will get a free month of Boingo’s Mobile service (which usually goes for just shy of 8 bucks), allowing them to hook their mobile handsets up to any of Boingo’s roughly 80,000 hotspots around the world. Boingo’s already got WiFi spots in a number of airports, McDonalds, Starbucks, and a laundry list of other major chains, so their offerings go together with Qik quite well. If you’re considering making use of the deal, know that a credit card is required and that it’ll auto-renew at the end of the month; such terms are commonplace now, but as someone who tends to forget to cancel trials I don’t want, I figured it was worth a mention.

Boingo has been offering an identical deal directly for some time, but this partnership highlights the potential money model for Qik and its competing services. By passively pointing out compatible companion services to their users, they’re able to bring in revenue without forcing pre-stream blurps or other sorts of advertisements down the user’s throat. We’ve confirmed that this is a revenue sharing deal between Qik and Boingo, though we’re not sure what sort of cut they’re getting. Qik will be promoting the deal with a community blog post, a listing on a partner page which will go live later today, and by featuring it on the user profile editing page (which every new user sees at least once), but won’t be advertising the deal within the Qik mobile application.