Google just released fourth quarter earnings. Net Income was down a whopping 68 percent to $382 million (compared to $1.2 billion a year ago), primarily because of a $1 billion impairment charge related Google’s ownership stakes in AOL (for which it took a $726 million writedown) and Clearwire ($355 million writedown). We all know why the AOL stake is worth less than what Google paid for it (just look at Time Warner’s stock.) Instead of the $20 billion that Google’s five percent stake valued AOL at the time of its original investment, its new writedown now values AOL at $5.5 billion.

The Clearwire writedown isn’t surprising either. That is the Wimax company that had disaster written all over it.

Google is also allowing employees with underwater options to swap them for new ones. That is going to cost Google another estimated $460 million over the course of the new vesting period.

Investors will likely ignore the $1 billion charge because they tend to see these sorts of things as one-time events (even when they occur on a regular basis). The charge does not effect Google’s cash flow or cash position. On a non-GAAP basis, Google beat Wall Street estimates, with non-GAAP earnings of $5.10 a share, compared to consensus estimates of $4.96.

I am waiting for the earnings call to start. My notes from the conference call (Sergey and Larry are not on the call).

Eric Schmidt: We had strong search query growth year on year, kept lid on costs. 4th Q advertisers invetsted where ROI was the highest, online. took significant writedowns with AOL and Clearwire. Both deals made sense to us then and make sense to us now.

Last Q we said we were in uncharted territory. We don’t know how long this period will last, certainly prepared to get through it no problem.

At least 85% of employees have stock under water. A voluntary stock swap program. Total options expected to make up 3% of total shares outstanding. Employees who swap will discontinued products will low impact. We will continue to review that. [mentions Wiki search]. Will continue to focus on search and advertising. Wouldn’t it be nice if Google understood the meaning of your query? We are looking into things like that.

We had another solid quarter,

UK soft because of currency, rest of EMEA did better, driven by Germany, France, Netherlands.

TAC was $1.5B, 27% of advertising revenues
Cost of revenue $707M, up slightly because of data center costs.

We launched 330 search quality improvements, most significantly the size of our index. Worked hard on latency across the board. We tripled the number of queries that triggered Universal search across images, blogs, books. Adding more books and expanding our index are very important efforts.

More people are searching from mobile phones. Our objective is to make search from a mobile phone as fast and easy as possible.

On the ad side, this was one of our strongest quarters for ad quality improvement. We will continue to get smarter about which queries should have ads to show users. We are now only back to where were back in 2008 from a coverage perspective.

beta launched keyword tool, helps advertisers find keywords on which they are not running ads. Most advertisers not maxing out daily budgets, so opportunity there. Launched Display Ad builder to create nice looking display ads straight from AdSense.

YouTube emerging as a key component of display strategy. People browsing for videos hundreds of millions of times a day.

Q: Why not more video ad

Eric: We have introduced 2 to 3 new formats for video advertising. All having some traction, have not found anything that drives revenues wildly. Virtually all the new device manufacturers have the ability to display Internet and Youtube content.

Jonathan: We have down quite a few experiments. Hard to match the right format with the right content. We have the in-video ads, also sponsored videos, contest platform, homepage sponsorship, click to buy. We have to come up with a standardized format. a significant constraint.

Patrick: On the mix issue, it is true the Adsense revenue was weaker. but Adsense for content had relatively strong quarter. In case of AdSense for search we did a lot of cleanup.

Omid Kordestan: On network, we did a number of quality measures to clean up. in terms of CPC we don’t break those out, but impact from Euro and Pound exchange rates. growth rates in emerging markets that have lower prices so downward pressure.

Jonathan: also consumers are doing more comparison shopping, so clicking through but not buying. or buying lower priced products.

Q: Capex was down significantly for the quarter. Is this a normalized level? Looking at the cost structure of Google, can you give us a sense of how flexible it is?

Patrick: I just want to reiterate we are investing. It just happens we are benefiting from economies of scale and greater efficiencies of our infrastructure. Moore’s law, better utilization. also big data centers are lumpy in the way they are invested. I’d be careful at looking at one quarter for purposes of forward modeling. We are a labor intensive business, so we have a lot of flexibility.

Q (Mark Mahaney): How much more opportunity is there for cost control? On CPC, can you help us think how deflationary CPC trends might be in an environment where lots of businesses might be going out of business.

Patrick: On the first Q, you ave to keep in mind the mindset of the company is to be a growth company. We are just managing responsibly given the environment.

Omid: If recession caused fewer purchases that would hurt us, but I don’t think you’d see CPC rates come down. CPC is really driven by users, not the number of advertisers coming in and out at any given time.

Patrick: The reason for TAC down QoQ is due to mix reasons mostly.

Q (Doug Anmuth): How has philosophy changed on distribution deals with Dell, etc. Why did you not continue to win those deals? And where is ad coverage going?

Omid: On the distribution deals, we are engaged in all of these discussions. We have a number of opportunities, from PC manufacturers to software toolbars that bundle our products like Chrome.

Jonathan: On coverage, we don’t know what the optimal mix is. depends on commercial versus noncommercial queries. We’d like to show fewer ads on queries that do not warrant them, and fewer, better ads on the ones that do.

Omid: Big customers especially are evaluating online marketing. they continue to take advantage of this, but maybe lower CPCs or size of campaign budgets.

Q: Can you give us an idea for strategy for display advertising (doubleclick, Youtube, etc)?

Omid: we are doing very well with Doubelclick integration. We are getting more inventory because doing a good job integrating. We optimize with AdSense only if they can’t get the higher price, so that is working out well. We feel this is a fragmented market ready for better measurements. Getting more traction here. 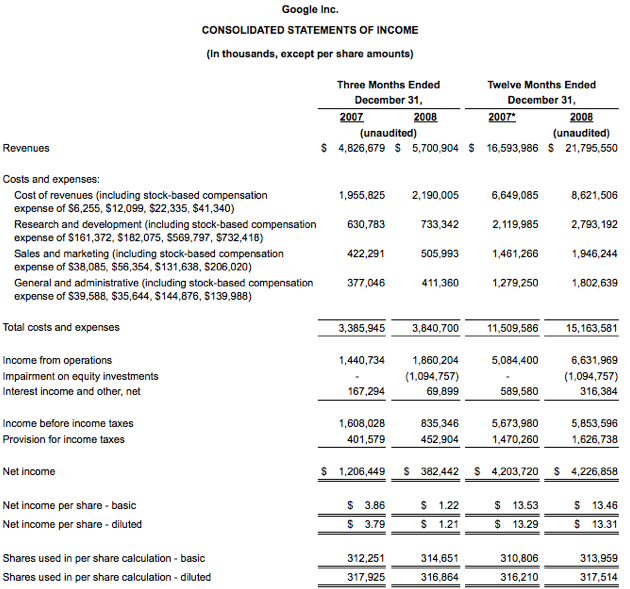