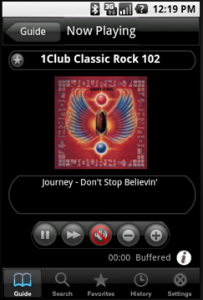 Looks like Slacker isn’t the only one using CES to push their mobile radio goods. FlyCast has long been available on the iPhone and BlackBerry platforms, taking a slightly more traditional approach to mobile radio; unlike Pandora and Slacker, FlyCast’s radio stations are all preprogrammed streams, though songs can be skipped at the user’s leisure on about 1/4 of the stations. This morning, they’ve announced that Android compatibility is one the way. It’s still “coming soon” – but G1 owners, keep an eye out.

CES SHOW, LAS VEGAS, NV – January 8, 2009 – FlyCast announced a number of new enhancements to its industry-leading mobile broadcast network today, including a move to the desktop with its new player widget for PCs and Macs. Other announcements include support for the T-Mobile G1and other upcoming Google Android-based devices, a new “What’s On Now” program guide feature, a Facebook interface, a partnership with AccuWeather.com and support for AAC+ and Windows Media streams.

“2009 will be a year of transition for broadcasting, as hundreds of millions of new ‘smart devices’ hit the streets, with incredible media consumption capabilities,” noted FlyCast CEO Sam Abadir. “FlyCast continues to lead the way in offering broadcasters and webcasters innovative platform capabilities to take full advantage of these new and compelling distribution opportunities.”

Beginning immediately, listeners can download a standalone desktop player that mirrors exactly the FlyCast mobile experience, with 1000 traditional stations plus 300 ‘personalized’ stations with unlimited song skipping available. Dedicated versions of the player will also be available for the company’s popular webcast partners, including AccuRadio, 1.FM, 977 Music, 1Club.FM and radioIO. These widgets can be downloaded free from the company’s website at www.flycast.fm. Based on Adobe Air technology, FlyCast’s widgets work on Mac or PC platforms.

In addition to supporting the popular iPhone, iPod Touch and the BlackBerry Storm, Bold and Curve, FlyCast now offers a version for the latest entrant into the powerful smart phone category – the Google Android-based T-Mobile G1. According to industry reports, dozens of new Android-based devices are in development and set for release in 2009.

FlyCast listeners will now be able to instantly select their favorite broadcast program to listen to from the company’s new ‘What’s On Now” feature. FlyCast broadcast partners, including companies like Entercom, FOX News, Sandusky and Cromwell Radio Groups, with 100s of terrestrial stations, stream many of the most popular shows in the U.S, including programs hosted by Rush Limbaugh, Bill O’Reilly, Laura Ingram, Sean Hannity and those featuring a number of popular sports show hosts, including Jim Rome, Mike & Mike in the Morning, The Herd with Colin Cowherd, and Tirico & Van Pelt. Listeners will be able to instantly tune into broadcasts as they air from the ‘What’s On Now’ guide component. And with FlyCast’s StreamShiftTM feature, listeners will be able to tune in to the broadcast at any point, ensuring that they do not miss any part of their favorite shows. Additionally, over 300 stations have been enhanced with unlimited song-skipping functionality.

FlyCast has partnered with AccuWeather.com, The World’s Weather Authority to provide its audience with instant weather forecasts and updates. When a user selects a city within Flycast, they are presented with one-click access to AccuWeather’s local forecast information, including current conditions with sky conditions, high and low temperatures, patented RealFeel® temperature and three-day forecasts. Through FlyCast’s partnership with AccuWeather, users can easily check the weather wherever they are, wherever they’re travelling, and wherever friends and family may be.

FlyCast will now offer support to broadcasters that have deployed their streams in AAC+ and Windows Media formats. The AAC+ codec offers higher quality at lower streaming bitrates, allowing broadcasters the ability to both save streaming costs and reach a larger audience that does not have access to more powerful 3G networks. The Windows Media codec provides similar quality and bitrate advantages, but is not natively supported by the Apple iPhone and iPod Touch.