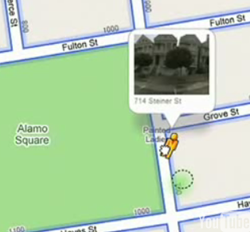 Google Street View may get a bad rap from some overzealous privacy watchdogs and conspiracy theorists, but it just helped police save a young girl who had been kidnapped over the weekend.

In the case, which involved a woman who allegedly kidnapped her granddaughter, Athol Police Officer Todd Neale managed to track down the missing girl by obtaining coordinates of her cell phone from the phone’s carrier. Neale contacted Deputy Fire Chief Thomas V. Lozier who worked with him in trying to figure out exactly where the missing girl was being held.

The two men found that the phone’s coordinates kept coming in within 300 feet of each other at an intersection in Virginia. Unfortunately they were located in Massachusetts, so they couldn’t just drive to the other side of town to take a look. So they turned to Google.

Using Google Street View, they virtually “looked around” the intersection, when they noticed a large building nearby where the pair might have been staying. They subsequently identified the building as a motel (again with Google), and then confirmed that the motel was nearby using Google’s satellite view. The pair notified the Virginia state police of their findings, who then found the 9-year old girl and her grandmother in the motel.

For the full story, check out this Telegram Article.