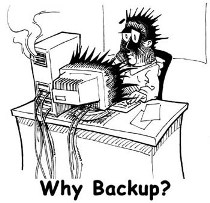 Blogging platform JournalSpace (which I’d never heard of to date) has ceased to be, following a wipe-out of the main database for which there was no back-up in place. According to the JournalSpace blog, the database was overwritten as a result of a malicious act from a disgruntled ex-employee.

It was the guy handling the IT (and, yes, the same guy who I caught stealing from the company, and who did a slash-and-burn on some servers on his way out) who made the choice to rely on RAID as the only backup mechanism for the SQL server. He had set up automated backups for the HTTP server which contains the PHP code, but, inscrutibly, had no backup system in place for the SQL data. The ironic thing here is that one of his hobbies was telling everybody how smart he was.

The company set up a Twitter account which it used for updates, and reading the messages in reverse chronological order is telling enough. If your blog was hosted on JournalSpace, you can visit this helpful blog post with instructions on how to save most of your content and comments using Google Cache.

JournalSpace had apparently been around for 6 years, and will now be releasing its source code to the open source community, and possibly sell off the domain name and trademarks.

By the way, when’s the last time you backed up all the data on your computer?