It’s rare to hear about genetics and advertising platforms in the same sentence, but new startup SnapAds has put together an ad service that effectively combines the theory of natural selection with banner ads – with very impressive results. The startup, which shares a number of founders with Weebly (though the two companies are unrelated), has created a system that dynamically adjusts the appearance of banner ads over time to maximize engagement. And it seems to work – a three day trial campaign for a recent film saw an increased clickthrough rate of 1922% over three days (not a typo).

To create a campaign, advertisers provide SnapAds with a special Photoshop file containing a number of specially-tagged layers with all of the art and text assets they’d like to potentially display in their banner. Advertisers can create rule sets specifying which layers are allowed to appear together, allowing them to ensure that SnapAds never generates an ad that is nonsensical or potentially offensive. Once all of the rules and assets are in place, the platform can get to work.

The process initially begins by displaying ads with a smattering of random combinations of the assets. As time goes by, the system identifies the most successful ads and allows these to “live on”, further modifying them towards perfection as the failures die off. Co-Founder David Rusenko says that a fully refined ad takes around one million impressions, but that the system never stops optimizing. Because user interest in an ad will typically wane after it’s been seen multiple times, SnapAds will continue to modify the ad indefinitely. The platform can also recognize when certain ads are more successful at different times, and will keep multiple branches of an ad “alive”, showing each at the appropriate time.

Rusenko says that to use the service advertisers will need campaigns consisting of at least 1 million impressions (SnapAds is not currently self-service), and that each ad is recommended to have 3-6 variables with 2-8 possible values each. Today’s announcement coincides with the launch of a SnapAds-powered campaign on Reddit and Wired for the AXE Detailer (man loofah).

While the initial results are promising, it’s too early to tell just how successful SnapAds will be. The system isn’t magic – it can’t automatically generate a new, especially appealing button or image. These assets will all need to be provided by the advertiser, and if there is nothing innovative to work with, SnapAds will only be able to offer slightly different permutations of the same generic ad. That said, provided the ad agencies can come up with a little creativity, the SnapAds service could prove to be very successful. 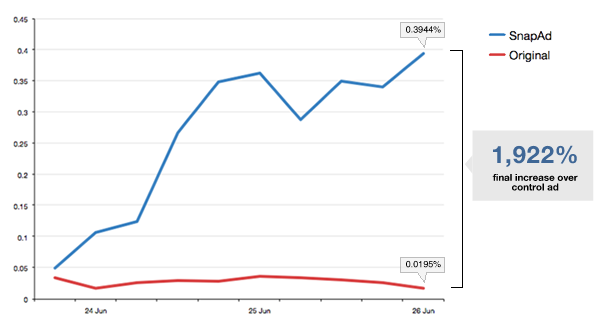