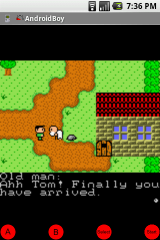 While it’s by no means playable at this point (unless your favorite hobby is watching sloths tend to a patch of growing grass), the Android Market has now seen it’s first video game emulator: AndroidBoy. As you may have guessed from the tail-end of the name, it’s a Game Boy emulator, supporting games from both the original Game Boy and 1998’s Game Boy Color.

The interface needs some remodeling, and the key mapping is going to need some work as well – but the first emulator on any given platform is always an important landmark, and things can only get better. As the legality of emulators is somewhat dubious, some questioned whether or not such an item would be allowed in Google’s Android Market. AndroidBoy’s success in making it to the market is a great sign of things to come.

I wonder when the Apple App Store will get an emulator? Oh wait, that’s not going to happen.